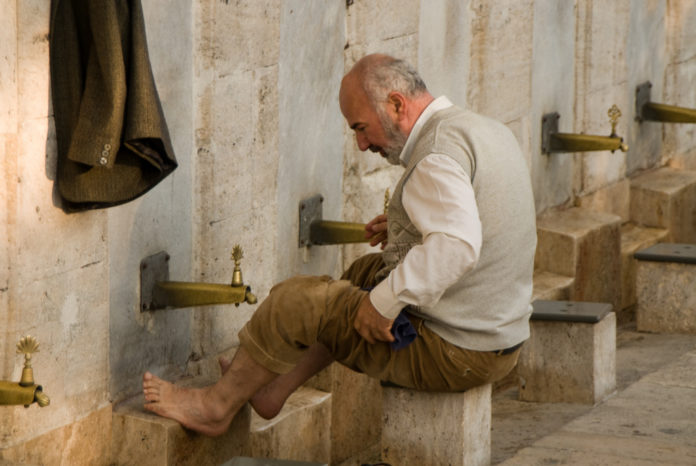 O believers, when you stand for prayer, wash your faces, and your hands up to the elbows, and wipe your heads, and wash your feet up to the ankles. If you are unclean, bathe and purify your bodies fully. But if you are ill or in the middle of travelling or … you cannot find water, then take wholesome dust and wipe your faces and hands with that. For Allah does not wish to burden you, rather He desires to purify you and to complete His blessing and favour upon you so that, perhaps, you may he grateful.[5:6]
Here is a grand prescription from among the many marvels of the Qur’an. The day will come when even non-Muslims will imitate the Muslim wudu or washing before prayer, a privilege and favour Muslims have enjoyed for more than fourteen hundred years. And they have done so, more or less, unawares, as it is only through the discoveries of biologists in the last twenty years that we have come to understand fully the wonderful effects of wudu. The three principal benefits that human health derives from washing are related to the circulatory system, the immune system, and the electrostatic balance of the body.

a) The circulatory system

The circulatory system is twofold. First, the heart pumps blood out to the tissue cells in every part of the body. Second, it collects back the biologically used blood. If this reverse circulation in particular is disturbed, diastolic blood pressure increases and ageing, even the onset of death, may be precipitated.

The healthful condition and functioning of the blood vessels is essential to this twofold circulatory system. Blood vessels resemble flexible tubing, dividing into thinner branches as the distance from the heart increases. If the thinner tubes in particular become hardened and lose their elasticity, pressure and workload upon the heart are increased. This is known in medical jargon as arteriosclerosis.

Various aspects of our lives cause the blood vessels to harden and become constricted. This problem, considered to be the basis of ageing and bodily deterioration, is now a distinct field of medicine on its own. Improper nutrition and nervous reactions can have a serious effect on the condition of the blood vessels. If sclerotic development is observed in a blood vessel, what practical measure can be taken against it?

The hardening and narrowing of blood vessels does not happen all at once, but over a long period. The vessels furthest from the heart, such as those in the brain, feet and hands, are more vulnerable to the process which begins slowly in these locations and goes on continuously with the passage of time. However, there is an application in our daily routine which, in a sense exercises blood vessels by alternately contracting and dilating them. Its agent is water, which gives rise to temperature gradients. Water ensures flexibility and visor of vessels distant from the heart by dilating them when hot and contracting them when cold. It also forces nutrients, deposited in tissues as a result of sluggish circulation, back into the bloodstream by virtue of the temperature difference.

In view of these facts, is it possible to understand the verse commanding Muslims to wash the hands, feet and face in the wudu rite as anything short of a marvel, particularly in the light of the conclusion of the verse: He desires to…. complete His blessing and favour upon you. Circulation of the blood is a favour to us from the Creator. The command to do wudu completes that favour by maintaining the blood vessels and the circulatory system generally in a healthy state. This is the first of the many blessings of wudu. It is impossible to deny the fact that washing protects against senility which is the way the hardening of blood vessels reflects on the circulation in the brain of a person who has been doing wudu regularly since childhood.

b) The immune system (lymphatic circulation)

In addition to the circulation of red blood cells in the body, there is also the circulation of white blood cells or leucocytes. The vessels of this system are ten times thinner than those which conduct red blood cells. We sometimes see its colourless fluid oozing from the skin walls in some abrasions or wounds. It is this lymphatic circulation which keeps all points of the body within the protection of the immune system. Any bacterium, alien object, or cancer cell (the cause of which is not known), which may have invaded the body is destroyed by the warrior cells or leucocytes in the lymphatic circulation. The appearance of an infectious disease or cancer in the body is always contingent on the malfunctioning of the immune system.

Exactly how this system of vessels expands and contracts has not yet been fully clarified. It is known, however, that heat and cold influence the system. Catching an infectious disease such as a common cold is ascribed to the inability, due to contraction of these vessels, to dispatch leucocytes in sufficient numbers to the afflicted area. Now the proper functioning of this system and its thin vessels, like that of the circulatory system in general, is closely linked with the invigorating effect of washing. The structure of the immune system, which provides resistance against all diseases, is reinforced through the wudu, and the divine favour mentioned in the verse is realized.

Now someone might claim that, while the lymphatic system is indeed invigorated by washing, it is just a coincidental and unintended side effect. However, the precise form of the command to do wudu disposes of this incorrect claim. I would argue, on the contrary, that the way in which the wudu is commanded to be done specifically aims at the lymphatic system as well. The reasons are as follows:

1. For the lymphatic system to function properly, even a single point in the body must not he neglected, which is assured by the full ablution or ghusl.

2. The most important centre for stimulating the lymphatic system is the nasopharyngeal region behind the nose and tonsils, and washing these spots is especially enjoined.

3. Stimulation of both sides of the neck has great influence on the lymphatic system, and this is also present in the wudu.

The most formidable warrior cells of the body, the lymphocytes, are transported to the farthest reaches of the body and, after passing through intensive biological training, patrol each point in the body many times a day. If they meet a bacterium or a cancer cell, they destroy it. Is this not a divine blessing of the first quality? If a circulatory disorder occurs once in a while and you are able to avert or mitigate its effect by means of regular wudu, is it not proper to regard the command as the promised fulfilment of divine favour for which mankind are required to give thanks?

The body normally has a balance of static electricity, and the physiology of a healthy body is closely related to this electrostatic balance.

Atmospheric conditions, as well as plastic clothing and products common in our time can adversely affect this balance. Painful illnesses, irritability and facial wrinkles are the best-known results. Most of us have become aware of this electricity when climbing out of a car or after sitting in a plastic chair. Stormy weather has a comparable effect. Healing by acupuncture and, in certain respects, physiotherapy, can redress this imbalance of static electricity; but we can avoid the effect entirely, simply by doing the wudu several times a day.

There are many psychosomatic illnesses arising from electrostatic imbalance. I shall not dwell on these here. I shall address only the question of skin care, which has become such a fashionable subject now.

The worst influence of static electricity is exerted continually on the small subcutaneous muscles (under the skin), finally rendering them inoperative, which is why wrinkles set in, starting with the face, though the skin is affected over the whole body. At this point, many of my readers will have divined at least one of the reasons for the radiant appearance of those who have done wudu all their lives. Whoever maintains the habit of regular washing inevitably has the more healthy, and therefore the more beautiful, skin. How remarkable it is that in our time, when millions are spent on cosmetics, a tenfold increase in expenditure would still not properly substitute for simple washing.

Doubtless, the sceptic will ask, but does wudu really have anything to do with static electricity?

Of course it does. The part of the verse pertaining to tayyamum when water is not available for wudu, underlines the fact. For this substitute for wudu also disposes of static electricity to a significant extent. Indeed, the importance of it has hitherto gone unrecognized, and no-one has tried to explain why, tayyamum can take the place of wudu when the necessity arises.

As the verse clearly states, the sanitary aspect of wudu is a great blessing which we can now partially explain in medical terms. A person might well say: But I already wash my face and hands anyway. Let us recall, however, that as a widespread public habit, this practice has a very short history (barely seventy years or so) even amongst nations who have a tendency to claim to be the most civilized in the world. More important, cleanliness based on a sort of general good advice can never be sustained with the steadiness of discipline which, in Islam, it has by virtue of its association with worship.

To be sure, the worth and significance of wudu does not end with these medical observations the sense of well-being and dignity derived from wudu also contribute to the general health of the practising Muslim but here my aim has been to make widely known precisely those additional medical benefits.

Medicine of The Prophet