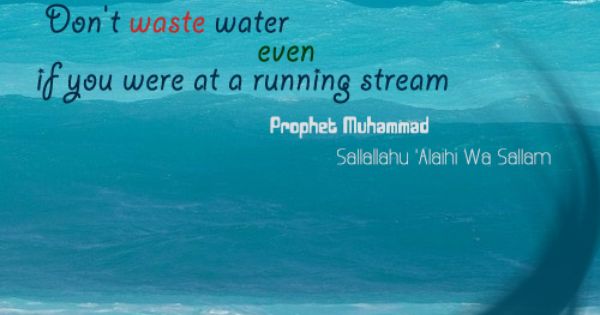 Water is a unique blessing, given to all living beings. It needs to be used with balance, harmony, economy, and justice. Agriculture, industry, and ecology depend on our water sources. What happens in one country may affect another. The Nile river and its branches pass through nearly 10 countries. The pollution of water sources has a devastating impact on the entire ecosystem.

There are two essential problems around water sources:

1) The inability to meet the increasing need for water, and

2) Pollution. Beginning in the mid-19th century, these problems grew in parallel with industrialization and an increase of urban populations. In time, nations started facing colossal problems concerning how to develop and manage their water sources.

Particularly after the 1980s, worldwide water organizations as World Water Council and Global Water organization were founded to bring together state leaders, ministers, and scientists to seek solutions. Among these, the World Water Forum meetings were started in 1997, and the seventh was held in 2012, and the eighth one will be in Brazil, March 18-23, 2018.

Along with trying to find common, reasonable, and balanced ways for water management, these meetings sought to raise public attention to the issue of water conservation. One of the most important of such meetings was the United Nations Water and Environment Conference, held in Dublin, in 1992. The World Water Council and Global Water organization were founded thanks to this conference. The Dublin conference was organized to discuss the danger that if water sources were not managed wisely, human health, food safety, economic development and ecosystem would all be under risk.

In the conference, essential new approaches for utilizing, developing, and managing fresh water sources were demanded, and it was emphasized that these approaches must be supported by certain programs. Significant investments, campaigns for raising public consciousness, studies for developing technology as well as legal and organizational regulations were listed as supportive programs.

Four guiding principles were determined at the Dublin Conference. In relation to the value of the water and what needs to be done for its management, one can easily draw parallels between the principles that were drafted in this conference and some religious teachings. Here, we will discuss the compatibility of this approach with the Islamic viewpoint on the issue.

The first principle: valuable and limited

The first guiding principle of the Dublin Conference says, “Fresh water is a finite and vulnerable resource, essential to sustain life, development and the environment.”

Many verses in the Qur’an draw attention to the significance of water, how it is formed, and that it needs to be protected. For example, verses like, “Say: “Have you ever considered (this): if your water should vanish underground (leaving you with no source of water), who is there that can bring to you (a source to replace it of) gushing water? (Mulk 67.30)” urge us to reflect on the significance of this Divine blessing, reminding us that water is valuable for every living being; it is a scarce thing to be protected.

The second principle: a participatory approach

The second guiding principle of the statement was participative management: “Water development and management should be based on a participatory approach, involving users, planners and policy-makers at all levels.”

Accordingly, a participatory approach promotes policy and the consciousness of water’s importance. It encourages the participation of users in decisions, planning, and implementation of their projects. This can be realized by establishing user unions or civil society organizations; these can play an important role in the formation of laws and regulations in conformity with sustainable water management. Active and positive participation in decisions concerning society are in perfect compliance with the Islamic teaching. The Qur’an praises and encourages making consultation with eligible persons about making decisions around a certain issue: “And those who answer the call of their Lord and obey Him (in His orders and prohibitions), and establish the Prayer in conformity with its conditions; and whose affairs are by consultation among themselves… (Shura/Consultation 42:38).

A similar command is given to believers in the person of the Prophet in another verse: “ …Then pardon them, pray for their forgiveness, and take counsel with them in the affairs (of public concern); and when you are resolved (on a course of action), put your trust in God. Surely God loves those who put their trust (in Him)” (Al Imran 3:159).”

The third principle: the role of women

According to the third principle, “Women play a central part in the provision, management and safeguarding of water.”

Protecting water and preventing water pollution is a social responsibility. In Islamic teaching, taking care of resources is not a gender-specific responsibility. Both men and women are protectors of resources. Both enjoin what is good and forbid what is evil. Parents, and especially mothers, can convey useful knowledge, customs, and practices to their children, contributing to the protection of water, preventing pollution, and encouraging sustainable water consumption. This means fulfilling a very important responsibility for protecting water as the essential building block of society.

As far as local or higher level councils and policies are concerned, women can and should be active members of water planning and management commissions. Teaching and transmitting correct practice and values about water and environment to new generations is critical for the future. Women play a key role in this respect.

Throughout history, Muslim women supported and pioneered the establishment of water-providing facilities. Lady Zubayda, who was the Abbasid caliph Harun al-Rashid’s wife, had a waterway built in order to channel the water springing from Mount Tad (on the Mecca-Taif way) across 40-km to the pilgrims’ ground in Arafat, and from there to Mecca. When these channels became unusable in the 1560s, Princess Mihrimah, daughter of the Ottoman sultan Suleyman the Lawmaker, had them repaired with metal and extended from Istanbul to Egypt, and she had fountains built all over Istanbul. This work continued for ten years with a thousand workers. Today as well, women from Anatolia continue to make serious contributions, opening water wells across Africa. These examples show that the third principle is in compliance with Islamic principles and practices.

Principle four says, “Water has an economic value in all its competing uses and should be recognized as an economic good.” The noble Prophet stated that the water, fire, and meadows in Muslims’ possession are their common property. This is the reason why water bodies are treated as belonging to the public in Islamic law. Based on this point of view, natural lakes and rivers cannot be sold. Reaching water is a public right.

Islamic laws make a distinction between publicly and privately owned water. Water wells, tanks, and other reservoirs are private water. If somebody makes extra expenses for conveying, purifying, or storing water, then it is regarded as privately owned. This has the following meaning: water users have to pay for the expenses of water management, purification, and protection. Together with this, a special tariff for low-income users needs to be practiced; such people must be supported. The water in canal systems or closed water distribution systems can be private, but everybody has the right to drink from this water. Complete private ownership can only be possible for water put in a vessel. The state has the right to charge people for the costs of providing, purifying, and distributing water to the public.

The issue of treating water as an economic commodity seems to be a contradictory issue. Much research needs to be carried out on water with respect to the economy, rights, and value. Protecting the environment, the sustainability of the ecosystem, and issues related to water purity and distribution, are not independent issues. Water issues are interdisciplinary and can be solved only with collective study by scholars of law, science, and religion.