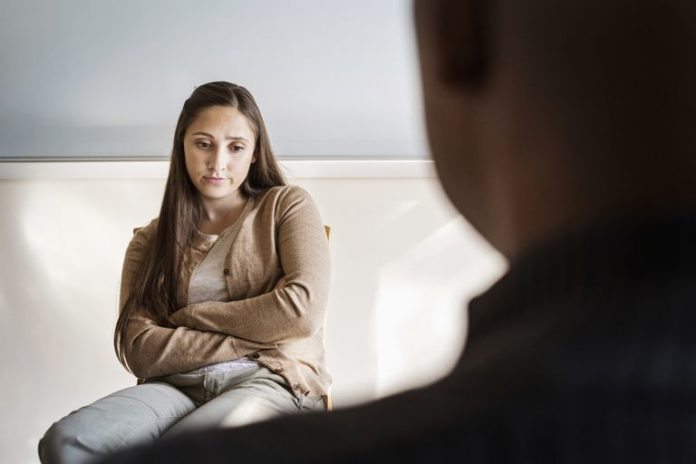 I saw my first psychiatrist before I got my first period.

I was 11 when I started getting panic attacks. They went as all panic attacks go: Everything was normal and then suddenly I was convinced I was dying. My chest was moving up and down but no air was coming in. My mom said I was breathing but I didn’t believe her. I begged her to take me to the hospital. If I were an adult, I’d have taken myself. But as a minor, I was forced to wait it out.

You can only stay in a panicked state for so long, but those hours were pure hell. The constricted breath, tingling limbs, dissociation, and peculiar conviction that the earth would open up at any second and suck me into its burning core. Compounding things, I was a child. I didn’t know what a panic attack was. I truly believed the end was imminent.

At my pediatrician’s insistence, my parents finally sent me to a psychiatrist. She told me I was very self-aware and good at analysis. I was 11, deeply ashamed to be in therapy, and did not take this as a compliment. (This was the ’90s, before every white girl with a pulse was chronicling their anxiety disorders on social media.) After the first few sessions, I stopped going back. Neither of my parents pressed me about it.

I didn’t go back to therapy again until I was 19 and dropped 30 pounds in a few months. When I went in for my routine checkup, my doctor gasped. I thought she was being hyperbolic when she insisted I see a shrink, but in retrospect, I was grateful. With the benefit of hindsight, I think I starved myself so someone would notice how much pain I was in. At that point, my panic disorder had morphed into general anxiety disorder — an invisible hand lightly strangling me at all times.

For the next five to seven years, therapy was great. I was also taking meds, but CBT (cognitive behavioral therapy, for those #blessed not to know) had a more tangible benefit. There was something about being forced to articulate my thoughts out loud that helped me identify the distortions. I once remember coming home after a session and chatting with my college roommate, a psychology major, who said to me, “it’s amazing how much of a better mood you’re in after therapy.”

That’s another problem with therapy: I think about the impression I’m making.

But in the last few years, therapy started feeling more annoying than helpful. I’ve moved a bunch of times, changed jobs and insurances, meaning I’ve seen 12 therapists in roughly 12 years, and interviewed even more. Each time I had to regale them with my tired history of garden-variety white girl issues. I was sick of talking about my mom. My mom is great. My childhood was fine. Nothing really bad has happened to me. I just have a sick brain. Not, like, psychotic. Just sick in the manner of any other brain in late capitalism. I have obsessive thoughts. I panic on airplanes and freeways. I can be callous and erratic with my loved ones. I mostly feel that life is pointless and the future is bleak. I don’t want to die, necessarily, but I also don’t have any strong desire to be alive.

I began my first session with my last therapist with a fevered tirade against the practice of CBT. I’m sure that made a great impression. That’s another problem with therapy: that I think about the impression I’m making. Normally I feel pretty invisible, but in therapy, I’m paying for someone’s attention. Quickly, the therapist becomes my audience, and therapy a place to workshop my one-woman show. And as a writer of personal essays, my narrative is so closely entwined to my work. How do I untangle the two?

My rant against CBT was inspired by some podcast. I don’t remember which, but I basically memorized it. The podcaster — a psychologist — described the three prevailing forms of therapy over the past half-century and explained how each tackles painful or obsessive thoughts. First was psychoanalysis, where the idea is to uncover the hidden meaning behind the uncomfortable thought by monologuing at a mostly-silent therapist. Popularized by Freud, notorious cokehead, this method is meant to bring repressed fears and conflicts from the unconscious into the conscious mind through free-association. Then came CBT, where the idea is to combat the bad thought with logic to prove it’s distorted. CBT is really into worksheets and homework, like keeping a “thought log” or “putting your thoughts on trial.” Third is mindfulness, where you’re supposed to notice the painful thought, not attach any meaning to it, and let it pass.

As soon as I heard the mindfulness description, I was like yassss bish. (The psychiatric community tends share my enthusiasm.) I wasn’t new to mindfulness, but the description delighted me because I was sick of attaching meaning to my every single thought. As one guided meditation I occasionally listen to put it, “the brain produces thoughts like the mouth produces saliva.” For someone who had been trying to unravel my wicked thoughts for years, the idea that they’re self-generating and not necessarily meaningful was beyond comforting.

I quickly started hating CBT. I decided it wasn’t the best method for achievers like me. People who take homework very seriously. I always felt pressure to do therapy “right.” To identify problems and talk through them analytically. To dance around my darkness and never touch the wounds.

Having entered and left the legal profession, I’m highly skeptical of logic. The last thing I want to do is put my thoughts on trial — trial is traumatizing! When I’m in a depressed or anxious state, logic will not save me. It doesn’t matter how many “objective” facts are thrown my way. I know I’m breathing because air is coming in and out, but it feels like I’m not. I know I’ve accomplished things, but I feel like a pathetic waste of space. I know people love me, but I feel repulsive.

I feel like part of mental health should involve an understanding that we can never entirely know ourselves.

We are in a cultural moment where there is a lot of pressure to love yourself. “Self-love” and “self-care” loom large on the social media stage. On Instagram, glamour shots detail body-positive journeys; hashtags read: #loveyourself and #selflovejourney.

But this leads me to wonder: what is the self exactly, and how do I #selflove her? I was in regular therapy for roughly 12 years, dutifully analyzing myself every week, and I still have no idea who I am. Nor am I convinced I have an essential self. I will feel something so strongly and in 45 seconds I will feel no type of way about it. I’ll think I’ve made real progress and then a fairly innocuous text message will send me into a rage blackout. My therapist will confront me with something I said a few weeks ago and I’ll think, who is she?

The late theorist Mark Fisher argued that contemporary approaches to mental illness “obfuscate[] some of the social roots of unhappiness, such as competitive individualism and income inequality.” He further lamented that modern therapies like CBT are imbued with the self-help notion that individuals can become masters of their own destiny.

But Buddhism (from which mindfulness is derived) believes the self is neither essential nor autonomous. It is rather a product of “the Five Skandhas,” or our five modes of existence — matter, sensation, perception, thought, and awareness. Philosophy Professor Michael Allen Fox believes that “a person should be understood as an active process, not a thing.”

I feel like part of mental health should involve an understanding that we can never entirely know ourselves. And while today is focused on self-discovery, I think we’ll soon trend toward self-oblivion. To let go of the idea that our selves are puzzles to be decoded, and instead embrace the idea that the self is, in the words of professor Fox, “not a thing.”

My mental health goal is neither to know nor to love myself. Rather, it is to see myself as nothing more than shifting conglomeration of molecules. An active process. Timid at times, powerful at others. Angry one second, at peace the next. Regretful, nostalgic. Excited, bored. Chatty, withdrawn. Rejected, loved. Reacting illogically to external stimuli, as all humans do.

Psychologist Bob Sharples wrote that mindfulness eliminates “any need for the subtle aggression of self-improvement.” It accepts that suffering is an inevitable part of life. We can’t end suffering, but we can stop the suffering about the suffering. We do this by observing our painful thoughts with a passive curiosity and letting them float by without judgment.

Therapy was giving my bad thoughts too much air time. I was getting frustrated. After this much therapy, I thought, I shouldn’t still be this fucking moody. The self-analysis was exhausting me, making me angry, and fueling my obsessive thoughts — like a snake eating itself.

When one feels “self-obsession of some sort,” said ethnobotanist Kathleen Harrison, they should “spend two minutes looking at a single leaf.” When we look at a leaf or a tree, we don’t judge it. We don’t think it looks fat or ugly. We don’t care if it’s rich or impressive. We don’t ask for explanations. We just let it be. Providing oxygen and making our spaces more serene. Not unique, just here.

When I close my eyes to meditate, I imagine a palm tree waving in the Santa Ana winds.