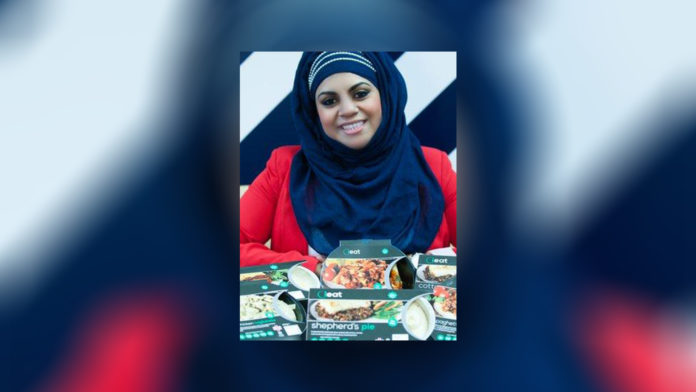 Shazia Saleem jokes that she started her food company simply because she was hungry.

The bigger story is that she spotted both a gap in the market and a way to celebrate the two parts of her cultural identity – being British and a Muslim.

The 29-year-old from Luton is the founder of newly launched ready-meals business Ieat Foods (as in “I eat”), which makes a range of traditional British and Italian dishes – such as shepherd’s pie and lasagne – prepared in the halal manner – according to Islamic dietary law.

Ms. Saleem first came up with the idea for the company when she was at Warwick University eight years ago, because she was fed up with having to buy vegetarian food to avoid non-halal meals.

“Most of my friends at university were non-Muslims, and when we did a weekly food shop together their trolleys were full of really tasty-looking ready meals, and all I could buy were things like cheese and onion pasties,” she says.

“It was really frustrating, and I used to whinge a lot that I was missing out. I thought, why wasn’t anyone making halal ready meals, other than the odd curry?

“That was when I decided I needed to do something about it. While moonlighting on other things, I then spent the next eight years putting together all the pieces of the jigsaw that needed to be in place before I launched Ieat.”

Good at sport, while at university she ran her own sports-coaching academies, focusing on netball and hockey.

While not making a fortune, she said it provided enough money to pay her bills.

And in recent years she bought and redeveloped a holiday resort in Cambodia.

Yet after leaving university Ms Saleem first got a salaried job, working for UK entrepreneur Peter Jones, one of the “dragons” from the BBC TV show Dragons’ Den, in which inventors and business people pitch for investment.

She says that getting a job in Mr Jones’ investment and portfolio office was an “unbelievable opportunity”, and a great way to learn about running a business.

“It was great working for Peter, but I needed to go and do something for myself,” she says. “I needed to push myself.”

So, having built up some savings, she left the UK and went to Cambodia. Despite no experience in the travel industry, she bought 50% of a run-down holiday resort.

“Some people thought I was mad, but I needed to go and do something completely different,” she says.

“I was like a project manager, and we turned the development into Cambodia’s first eco-resort. We made a success of it, and ultimately I sold my share.”

Returning to the UK, Ms Saleem says it was time to finally launch Ieat Foods.

She says the final impetus for setting up the company was the death of her father at the beginning of 2013.

“One of the last things he said to me was, ‘You must go and do it, and make it successful’,” she says.

Ms. Saleem conducted market research, which showed there were thousands of second-generation UK Muslims like her who wanted to buy halal ready-meal versions of traditional British and Italian dishes, made from all natural ingredients, and that tasted good.

“The first generation of Muslims who came to this country typically would have stuck to the food they were used to,” she says. “But us younger Muslims want to try different types of foods, we want to eat the ‘normal’ foods that British people do.

“Ieat gives those that follow the halal rules a convenient and healthy chance to do so.”

Ms Saleem says her next task was to establish a supply chain she could trust, with all the food ingredients being fully traceable. A halal-only factory in Yorkshire was secured, and all natural recipes finalised.

Then six months ago, Sainsbury’s agreed to take Ieat Foods’ first 12 product lines in its stores in London, Birmingham and Leicester, and they are now being stocked.

But isn’t halal slaughter – which involves cutting the animal’s throat without first stunning the animal – at odds with the business’s boast of good animal-welfare practice and ethics?

She says: “There are lots of credible studies which show that when done correctly there is no more suffering than non-halal.

“I have hand-picked the best suppliers who adhere to the highest welfare standards, not just at the time of slaughter, but throughout the life of the animals.”

“I get my ambition from my parents, who came to this country from Sri Lanka with nothing and both worked multiple jobs to make a good life for themselves and their family,” she says.

“And my faith and my British identity is why I’m doing this particular business. I’m just mixing the two.”