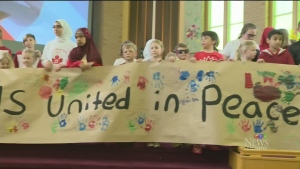 They may be from different faiths and cultural traditions, but on Saturday two congregations gathered together to mark Canada 150.

The Bedford United Church and the mosque down the street united for a rare interfaith service.

“We are setting a precedent to break down barriers,”  says Imam Sayed Mohammed Al-Qazwini of the Al-Rasoul Islamic Society. “If you get to know your neighbour, we can attain global peace.”

Rev. David Hart says this day all started with his own curiosity. He wanted to know more about the mosque beside his church.

Hart says too often, people let fear stand in their way of building relationships. So together they facilitated an introduction.

“It’s when you don’t know people that the things that seem different cause you fear,” says Hart. “But once you start having conversations with them and getting to know them as neighbours, there’s so much we share in common.”

While their hands are united in peace, the imam acknowledges how stereotypes and barriers are built up by world events and tragic news stories.

The congregation emptied into the streets following the service. Both faith followers then formed a human chain between the church and the mosque.

It was a day of relationship building and understanding as people paired up to teach and learn.

“Islam means peace. That’s it,” says Duaa Haydr. “This is all about peace and what comes after it – love, respect. If people just know what does Islam mean, they will stop misunderstanding.”

Sunday was symbolic in the Muslim faith calendar as they celebrate the end of Ramadan.