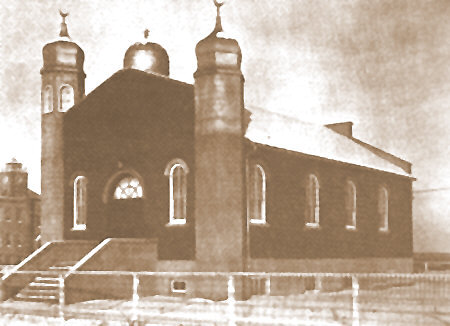 In the early 1930s, the total Muslim population in Canada was 645, with highest concentrations in Saskatchewan, Alberta, and British Columbia. Edmonton was home to the largest Muslim community whose members became increasingly concerned about preserving and passing on their faith and traditions to their children.

In May of 1938, a small lot was purchased for $5000 as the future site of the first Muslim place of worship, or mosque, built in Canada. Although incomplete in November of the same year, Al Rashid Mosque housed its first religious event – a funeral for Ali Tarrabain, a Muslim pioneer who immigrated to Canada at the turn of the century.

Finally, on December 12, 1938, the official opening of Al Rashid was held, with attendance by the Mayor of Edmonton and the Mayor of Hanna, Alberta. The dedication was performed by Abdullah Yusuf Ali, a prominent Muslim scholar and translator of the Qur’an, the Muslim holy book.

In the following years, Al Rashid was used as a community centre and gathering place for Muslims and non-Muslims. It was a significant religious centre that attracted Muslims from other parts of Canada. In November 1982, a new mosque, also named Al Rashid, was built to accommodate an expanding Muslim community, leaving the old mosque vacant for years.

Threatened to be demolished to make room for an expanding school and later, hospital, the old Al Rashid was moved and now stands as a historic building in Fort Edmonton Park.

Today, the Al Rashid Mosque is one of six mosques in Edmonton, all serving a community of about 20 000 Muslims. The new centre offers funeral services, housing, educational programs, and runs a full-time, independent school.

The Historical Development Of The Islamic Community In The United States