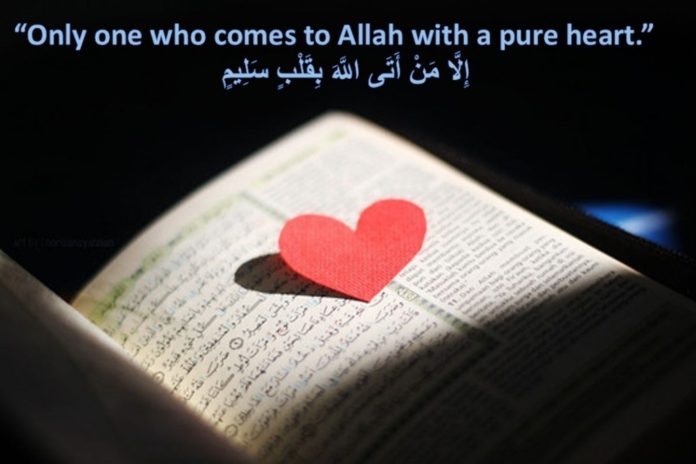 In Arabic, dua literally means to call out for help. In Islam, it refers to the personal calling of the believer to his Lord.[1] This is to be distinguished from the formal prayers (salah) that are prescribed for Muslims five times a day. Unlike salah, dua is not compulsory in Islam, in the legal sense, and is therefore more personal and intimate.[2] It is to be noted that Islamic scholars have translated dua in various ways, yet all of them evoke the meaning of a heartfelt cry of the believer to the Almighty. The purpose of this essay is not to go through every aspect of dua, but to more precisely dig into its particular role in the purification of the qalb, the heart, and aql, the intellect.

Qalb in Arabic is literally translated as heart. However, qalb in Islam is vaster and most often refers to one’s spiritual heart, the spiritual center of the body.[3] The qalb is considered to be the root of one’s emotions and spiritual connection to God. A verse in the Qur’an equates salvation in the Hereafter to only the believer “who will come to God with a pure heart (qalb-un-saleem) (26:89).” The Prophet Muhammad, peace be upon him, said, “There lies within the body a piece of flesh. If it is sound, the whole body is sound; and if it is corrupted, the whole body is corrupted. Verily this piece is the heart (qalb).”[4] Many other verses and ahadith (sayings of the Prophet) suggest that Islam equates the very purpose of human existence, for the believer, as endeavoring towards purification of the heart.

Similarly, a believer is advised to develop their aql (intellect). Aql literally means perception. Aql helps people to intellectually engage with and contemplate the signs of God and accept belief in Him.

This understanding does not indicate understanding His essence (dhaat), but rather that aql paves the way to understanding spiritual realities and thus brings a person closer to God.[5] In one’s default state, the aql functions to remove the veils between a person and God[6]. It can serve as a ladder to spiritual development. But like the qalb, if it is corrupted by sins and passions, then it will lead a person away from God.[7] It is thus of utmost necessity for the traveler on the spiritual path to develop his aql which will then serve as a bridge towards God.

Having established the importance of the purification of the qalb and the development of the aql, it’s also necessary to mention that there are various tools in Islam given to achieve these two major aims. For the purpose of this essay, we will focus on one such tool, the dua. And more particularly, this essay will explore how dua actually achieve these aims.

Firstly, dua is an affirmation of tawheed, through which one purifies their qalb from all other than Him (shirk e khaffi) and also leads to developing the aql. When a believer turns to God in dua, he or she is putting his trust in Him. The believer is realizing that only God can help him or her attain whatever they seek. It is an acknowledgement that no one besides Him has any power, not even one’s own self. The development of the aql is thus done through pondering and realizing (tafakkur) that all power rests with Him alone and not with causes.

One example out of many is seen in the dua of Prophet Jacob (Yaqub) (peace be upon him) mentioned in the Qur’an. When two of his beloved sons were missing and not only did he not know their fate, but all odds of finding them were against him, he turned to God and pleaded in one of the most perfect manifestations of tawheed: “Verily, I only complain of my grief and sorrow to Allah” (12:86). This is encapsulated by Qadhi: “Part of the completeness of a person’s tawheed is that he does not complain to anyone else, in order to gain their sympathy and pity. Rather, the true Muslim submits all his affairs to Allah…”[8] It is important to note that this does not indicate that means are to be left. The means are being used, but the believer’s main hopes are in his duas to the One who owns and controls all the means (Musabab-ul-asbab). This necessitates intellectual understanding and heartfelt submission. The Prophet Muhammad (peace be upon him) said that dua is the “weapon of the believer.”[9]

Another major way to develop the aql comes from witnessing the cause and effect of dua. When a believer turns to God when all means have failed and places their hopes in Him, their conviction in God as the Real Doer (Fa’ail-e-Haqeeqi) and that He alone is worthy of being worshipped. He relies on God in absolute terms, an indication that the aql has developed to a higher level.

Furthermore, supplication is the means through which the believer attains the closeness of God and His love (ishq-e-Illahi), which is essential for the purification of the heart and the development of the intellect. A verse in the Qur’an reads, “And those who believe have intense love for God.”[12] Professor Kamaluddin Ahmed, commenting on this verse, states that, “with the construct “those who believe,” God challenges the believers by describing a characteristic of true belief. It is as if His verse calls out, ‘O ye who claim to believe, who profess that the light [nūr] of faith is in your hearts, know that the true believers are intense in their love for Allah.’”[13] And thus, it is from such verses and hadith that scholars say with true love for God believers can attain the true salvation in the Hereafter.[14]

Much has been written about how to achieve the true love for God. Scholars have written that yearning for God, decreasing one’s dependence on the world, and reflection on the worldly and spiritual blessings bestowed by God, are all factors that increase a believer’s love.[15] All of these attributes are inculcated through dua. As the believer calls on their Lord and becomes dependent on Him for their every need, their yearning for Him increases, their dependence on the world decreases, and they realize the divine blessings. It is human nature to fall in love with the one who helps you, which in spiritual terminology is often referred to as ashiq-e-ihsani. When a believer falls extremely in love with God, then naturally all the attributes that a true believer needs start pouring over them. They fix their compulsory acts and work to make them better in order to please their Beloved. They work to remove all negative attributes that are disliked by their Beloved, such as anger and hate. As this is done, the believer begins to slowly purify their heart from all other than Him, until nothing remains except love for Him and love for His Sake.

And as a believer falls more in love with God, they start seeing His attributes manifested all around Him and his knowledge of the divine increases (maarifatUllah). The intellect thus views the world through the lens of which God wishes. He or she becomes the living example of the hadith qudsi[16]:“I am his hearing with which he hears, his sight with which he sees, his hand with which he seizes, and his foot with which he walks. If he asks me, I will surely give to him, and if he seeks refuge in Me, I will surely protect him.”[17] The intellect is thus developed to its default state of purity and soundness; i.e. aql-e-saleem.

Furthermore, supplication makes a believer realize their true purpose in life: servanthood (uboodiyah) of God. A verse in the Qur’an states that, “I did not create the jinns and the human beings except for the purpose that they should worship Me” (51:56). In another place, the Qur’an says, “O mankind, you are fuqara (extremely needy) of God…” (35:15). These verses have a vital connection. As a believer realizes his or her true need (faqr) of God, only then will he or she truly be ready to fully submit to His commands and make their uboodiyah the purpose of their life. Supplication is the tool which can serve as that perfect bridge between the two states – of leading to a believer’s realization of their faqr and to the perfection of their uboodiyah.

As discussed earlier, when a believer turns to their Lord, they do so realizing that the power to help rests only with God. The believer realizes that he or she is not independent, but rather in deep poverty and needs God for their every need. This gets rid of any self-delusion or arrogance that may creep upon a person: “And your Lord has said ‘Make dua to Me, and I will respond to you” (40:60). As a person turns more frequently to God, the realization of their dependence does not allow any pride to develop. And as the believer internalizes further their uboodiyah, and the diseases of the heart such as vanity, false hopes, boasting and arrogance, love of the world, and relying on other than God, are cured.[18] The way he or thinks about every action begins to reform in accordance with what leads to the pleasure (radhaa) of God.

Supplication is thus potent in making a believer understand his or her need for God, which makes them internalize their servanthood, which then leads directly and indirectly to the purification of the heart, and reforming their intellect in accordance with the pleasure of God. It can thus be concluded that supplication plays an extremely important role in the purification of the heart and the development of the intellect.

Qadhi, A. A. Y. Dua: The Weapon of the Believer: A Treatise on the Status and Etiquette of Duʻa in Islam. Birmingham, England: Al-Hidaayah, 2001.

Yusuf, Hamza. Purification of the Heart: Signs, Symptoms, and Cures of the Spiritual Diseases of the Heart. Bridgeview: Starlatch, 2011.

[11] Hamza Yusuf, Purification of the Heart: Signs, Symptoms, and Cures of the Spiritual Diseases of the Heart, (Bridgeview: Starlatch, 2011).

[18] Hamza Yusuf, Purification of the Heart: Signs, Symptoms, and Cures of the Spiritual Diseases of the Heart, (Bridgeview: Starlatch, 2011).

Thanksgiving: Now And Then

I Failed Hard At Ramadan & Here’s What I Learned