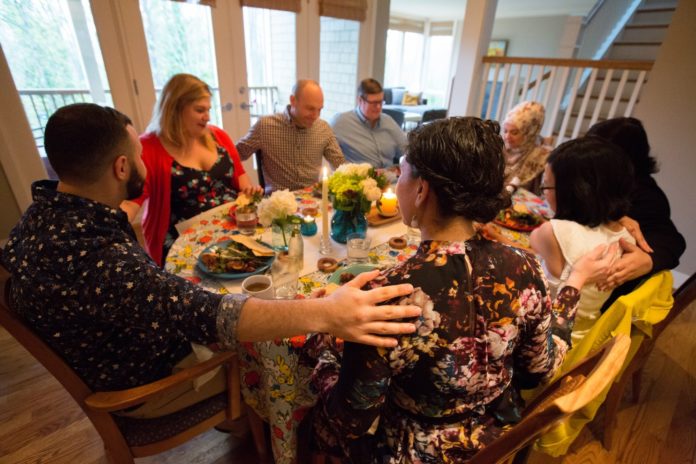 Her face framed by a delicate floral-print headscarf, Amanda Saab stepped into a Safeway. Ninety minutes later, the cashier rang up her groceries: $218.45 between Amanda’s brimming cart and the one steered by her husband, Hussein. The couple called an Uber and loaded the bags into the trunk. The driver asked their plans.

A dinner party, Amanda replied: “Would you like to come?”

Inviting strangers was one point of the feasts that Saab, 28, prepares for what she calls “Dinner With Your Muslim Neighbor.” She cooks — often in her own home and sometimes, as on this vacation trip, in a borrowed kitchen — and the couple answers any questions guests might have about their religion.

Amanda has had exposure to such questions, and the uncomfortable rise in fears about Islam, on a national stage. She’s learned that the answers — and any changes to hearts and minds — best unfold one tableful at a time.

Reality TV devotees know the cooking part would be a breeze for Amanda, a fan favorite on Season 6 of Fox’s “MasterChef” in 2015. Friends and relatives knew it, too. Advancing from an Easy-Bake Oven at age 5 to a Kitchen­Aid mixer at 16, she baked tiered cakes and piles of pastries for her extended family’s weekly gatherings in her home town near Detroit, where the Muslim population is among the nation’s largest. On weekends, she stayed up past her bedtime to watch “Iron Chef America.”

Her religion seemed no more a public issue than anyone else’s when Hussein, 30, saw the “Master­Chef” casting call. “You would rock at this,” he told her, and judges agreed after tasting her baklava blood-orange cheesecake at the open auditions.

When she survived the first rounds, viewers wrote about the joy of finally seeing a “hijabi” woman on an American cooking show, a fellow “Muslimah” who represented them so beautifully. They praised her favorite comfort food (kibbe neeyah, made with raw beef) and noted her graciousness and generosity as she baked turmeric-date cakes and French toast (with the first bacon she had ever fried, though she didn’t eat it). They asked where she bought her dainty headscarves (everywhere from Target to Haute Hijab).

On the flip side came suspicious social-media posts and hurtful ones; she recalls viewers calling her oppressed, asking if she needed the permission of Hussein, a Boeing employee, to appear on the show, questioning her “true” motivations.

“It made me realize: Just my existence in the world is bothersome to some people.”

Ultimately, she was eliminated because of an underbaked cake. Home in Seattle when the episode aired, she decorated five fancy cakes and delivered them to a local food bank, moving forward.

Unlike Hussein, who could walk through a crowd without drawing attention, the hijab flagged Amanda as a practicing Muslim, a literal target for people such as the shopper she overheard at a sporting-goods counter who said the guns on sale were needed against people like her. On TV, she heard then-candidate Donald Trump calling for a “complete shutdown” of Muslimsentering the United States.

Clearly, she said, a lot of people must not know any Muslims.

Her voice cracked as she recalled the realization: “Have I played a part in that? Have I not reached out to people and given them an opportunity to meet me?”

She told Hussein, “Let’s invite strangers over for dinner.”

That’s a tall task in Seattle, where the difficulty of making new connections is so established it has its own name: the Seattle Freeze. That’s on top of standard suspicions of free and supposedly no-strings meals.

Once again, the TV exposure helped. Amanda’s social media posts, with invitations to share them widely, brought more volunteer guests than their dinner table could handle.

“I wish we could say that we don’t have feelings of contempt for Islam and what it appears to represent,” one local commented on Amanda’s blog after she wrote about the first dinner. She responded with an invitation to the next. Dinner With Your Muslim Neighbor became a regular event, its reach only broadening when the couple moved back to Michigan recently to be closer to their families as they started their own.

One Friday in April, Amanda asked on Facebook whether anyone wanted to host a Seattle dinner three days later, when she and Hussein would be visiting. “I’ll do the cooking!” she added with a smiley face.

The Saabs shopped near the home of their selected hosts, Stefanie and Nason Fox, whom they had met at a Seattle vigil for victims of the 2016 massacre at Pulse nightclub in Orlando.

The dinner fell during the eight days of Passover, which her hosts observed. Researching the Jewish holiday’s dietary restrictions, Amanda purchased matzoh meal for the first time and arranged her menu around rules of chametz and kitniyot.

The welcoming dinner table at the Fox home was set for eight with bright Fiestaware plates and clusters of white hydrangeas, fat beeswax candles alternating with tall lit tapers. Guests arrived bearing more flowers and made their introductions either to the Saabs or the Foxes, depending on whom they knew. (The Uber driver, babysitting grandchildren, texted her apologies.)

They filled their plates from the Saabs’ buffet: salmon blanketed in caramelized onions with a contrasting bite from horseradish, rosemary-roasted potatoes, carrots with honey and thyme, a leafy salad, almond-garnished asparagus in an orange-yogurt sauce.

Hussein led the group in an Arabic prayer, then asked Stefanie whether there was an appropriate Hebrew blessing to follow. After praise for the meal, the questions began.Where’s your family from? (Dearborn, Mich. Both have Lebanese ancestry.)

Does Islam have sects like Christianity does? (Yes, Sunni and Shiite are the main ones.)

And, eventually, a less-charged query: “Can I ask how you make your potatoes so crispy?” (Bottom rack of the oven, lots of olive oil.)

“We’re not theologians,” Hussein said. “We’re not clerics. . . . We try to practice our faith as best we can, and we’ll answer any questions you throw at us as best we can.”

Amanda described meeting Hussein in their mosque’s youth group, though they were friends for years before dating. Her mother did not wear a hijab at the time, she noted, but Amanda was a typically rebellious 16-year-old who questioned her religion, studied it and ultimately embraced the covering “to wear my faith outwardly, to remind myself of my inward faith and connection to God.”

She donned the hijab midweek, months into the school year. Her Spanish teacher asked if she was a new student.

As congenial as it was, conversation throughout the two-hour meal was intense and sometimes tearful, covering doctrine and culture and extremism. Both Amanda and her hosts choked up describing the vigil where they met. A stranger yelled, “What are you doing here?” at the hijab-clad woman, steps away from where Stefanie and Nason Fox stood wearing shirts that read “Stop profiling Muslims.” Amanda ran over and embraced the then-strangers.

“I’m just so sorry that you walked down the street and people are so terrible,” Stefanie Fox said. Stefanie works for a Jewish organization in Seattle, and noted that “I get a lot of hate mail in my job, but it’s not personal.”

Emotions also cranked higher when Fox’s neighbor, Greg Pomrehn, said he doesn’t find his own faith as a Christian represented well in the media and can only imagine it’s the same or worse for Muslims. His wife, Charissa Pomrehn, said she had prayed as a Christian to know more about her Muslim neighbors and that the dinner was like the literal answer to her prayers — with food a “disarming” way to make the connection.

“What you are doing, I think, shines a light,” Anjana Agarwal told Amanda.

It’s easy to imagine such fraught topics going off the rails with different guides. It helped to have a social worker’s presence, trained in hearing other people’s perspectives.

The question is how much one couple can do. The Saabs consider the investment of time and money worthwhile and plan to continue the dinners, but both have full-time jobs, with Amanda now overseeing a social services agency. Their first child is due this summer.

Partnering with Michael Hebb, a teaching fellow at the University of Washington’s communication leadership department, they’re assembling a free online tool kit they hope others will use to hold their own dinners.

“There’s never been a more important time” for this, said Hebb, a former underground restaurateur who specializes in creating conversations on difficult topics, most recently a global project called “Let’s Have Dinner and Talk About Death.” He thinks Muslim-neighbor dinners can scale up the same way, to the hundreds or thousands — or hundreds of thousands.

“If you give people the right tools, you’ll set them up for success.”

At the Fox home, that night’s dinner concluded with Amanda’s macaroons and a kosher strawberry trifle. Guests embraced the Saabs and one another as they said good night, bearing ribbon-tied goody bags with date-filled maamoul and coconut cookies from a Middle Eastern bakery in Dearborn.

If the country is seeing a rising tide of hatred and fear, Nason Fox told Amanda, the dinner had been “a ripple effect” of response, spreading farther than any of them might know. “There are so many stories,” she said. “Who’s hearing that and taking it in?”

Denn is a freelance writer based in Seattle. For information on how to host a dinner, go to MuslimNeighbor.com.

The Grass Is Not Greener On the Other Side

Inshallah: Singing for Peace and Justice