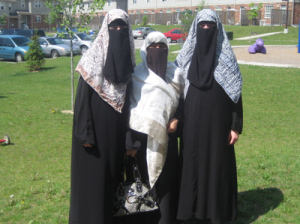 Knowing my love for all textiles cultural, my dear friend Noha brought me a full hijab from Saudi Arabia. As soon as I had it I knew I wanted to spend a day in hijab, running errands around town, and walking for a day in another’s shoes. I wanted to check if Canadians really are as accepting as we like to think we are. I asked Noha to come with me, so she could guide me, and run interference if anyone came up to me and started speaking Arabic. Also, this way I could discuss with her my impressions and get her take on her daily life in Canada. Our mutual friend, Kiera, also decided to join us, and so on the hottest day of the spring of 2008, we decided to venture forth. Kiera and I decided that because we are white we would cover our faces. Now, of course there are many white Muslims, even in the Middle East, but in Canada people still tend to do a double take when they see a white woman in hijab. I wanted people’s responses to be a little more “pure” than that, to respond to us as “Muslims”, not “white Muslims”. So we covered our faces.

Kiera and I walked over to Noha’s house, where she suggested I borrow one of her scarves. She said being dressed all in black in Canada would cause even Arab Muslims to stare (it’s a cultural colour in Saudi Arabia, apparently, not a religious requirement). She was also concerned about how hot I was getting, because I was in my first trimester of my second daughter’s pregnancy at the time, and her scarf was cooler. So I switched, and Noha showed us how to tie it in the Turkish style (it was a windy day and when we pinned it it kept blowing open and showing our necks). Noha does not usually cover her face in Canada, but she did that day because Kiera and I did.

Both Kiera and I tried driving to see how that was changed wearing a veil. Definitely cuts down on your peripheral vision, but you could get used to it.

What was most interesting was other drivers’ responses. Apparently a car full of Muslim women is still novel enough in this city to attract a few stares! The most obvious were an older couple who were sitting at a red light as we turned left. They stared at us, visibly hostile, mouths open, as we turned left by them. Noha had warned us that responses tend to be generational, and that was certainly our experience. Older people glared at us wherever we went. Middle aged people took note of us, but didn’t seem hostile. People of our generation (20-30ish) took us completely in stride and treated us like anyone else.

Our first stop was a children’s clothing store, Bonnie Togs. If I had a wall of shame, they would go on it. I shop there regularly, and could not get over the difference in how I was treated in hijab. Usually, when I check out, there’s the usual counter exchange: “Hi, how are you? Did you find everything you were looking for? Oh, this is a cute top. How old’s your daughter? Okay, it’s ready, please type in your pin – here you go (handing me the pin pad).” etc. When it was my turn at the counter this time, however, the woman didn’t so much as smile at me. She would hardly look at me, and although I tried engaging in conversation with her, grunts were all I got in reply. When I offered her my debit card, she practically snatched it, making very sure to stay as far away from my hand as possible. She stood there, drumming her fingers on the countertop for a while, until I finally realized she was waiting for me to key in my pin number. While this was going on I asked a question, and barely got a civil reply. She put me card down on the counter, making me reach across for it (it’s always been handed to me in that store, and has been every time since). She shoved my receipt in the bag and pushed it across to me. You have a nice day, too, lady. Noha didn’t notice anything unusual, because the few times she had been in, that’s how it had been.

We went to Just For You (I was looking for some nursing bras) and the lady was very kind and helpful, although they didn’t have any nursing bras.

We were running out of time at this point, and getting hungry (I was pregnant, after all!) so we decided to go to East Side Mario’s, in the University Plaza. They were very busy, since it was lunch time, but everyone was extremely courteous and helpful, from the lady who seated us, to the server who checked on our questions about the food to make sure it was Halal, to the manager who came out to tell us what I had ordered wasn’t available and who came back later to make sure everything was okay. Learning to eat with a veil on was a little tricky at first, but quickly became easy – just a little slower. And because I’m such a messy eater I had to be careful about my Caesar salad!

After that, because it was Friday, it was time to go to Masjid. It was very busy, and I enjoyed the young men who’s job it was to direct us to where we could squeeze our car in (the process having to be repeated when we left). Most of the service was in Arabic, so of course I didn’t understand it. But I certainly did enjoy seeing the many different styles of hijab in the lady’s section. In this mosque, the lady’s section is an entirely different room, with the service put in through a speaker. I felt disconnected from the service itself, and missed worshipping together as we do at our church, but I did enjoy the feelings of connection with the women present. Kiera and I both especially enjoyed the prayers. There’s something very beautiful in full body prayers. It was very interesting for me to see all these Waterloo Muslims together, because many of them (especially the men) you would never know were Muslim if you ran into on the street. Afterwards, Noha visited with a few other ladies, and everyone wanted to know if we were new converts. It was very much like chatting after church.

We went home, then, dropped Noha off at her house, and Kiera and I stripped, grabbed some popsicles, and sat in the shade outside, cooling off, and dissecting our experience. The number one thing that Kiera told me was how liberating she found it. As you can see from her picture, Kiera is stunning. She feels that whenever she meets someone, they are judging her on her beauty, but when she was in hijab they were focused on her. Also, even though it was definitely a hot experience (everyone at Masjid wanted to know why we were doing this on the hottest day!), it was not nearly as hot as I had thought it would be. Part of the problem was that we had to wear jeans so our legs would be covered. But it was a very welcome relief to put on a skirt and feel the wind on my skin again.

Overall, Canadians were friendly to us, but we were definitely seen as “different”, sometimes just curiously, and sometimes with animosity. Similar to how mommies with babies exchange appreciative and knowing smiles, in hijab we felt like we were on the inside of a special club. Afterwards, whenever I saw a Muslim woman in hijab, I wanted to smile and exchange that “knowing” look. But, of course, she wouldn’t know that for a day, I had walked in her shoes.