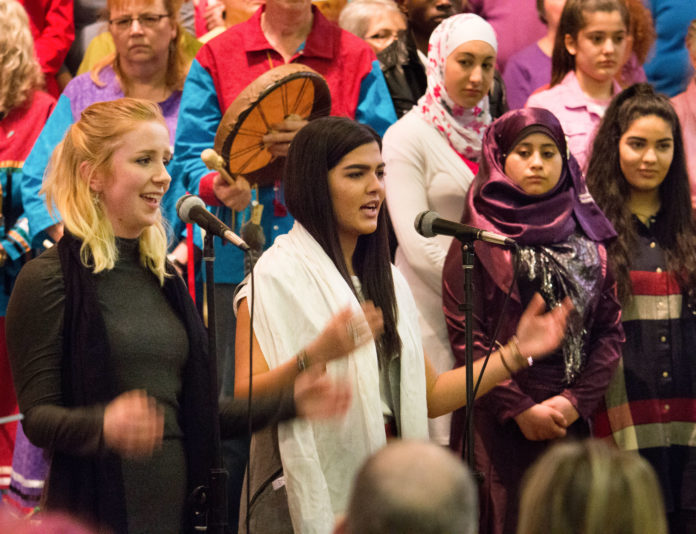 The first time you hear about the local choir called Inshallah, naturally you might think it’s composed of Muslim voices.

But while some of the choir’s 130 members follow Islam, nearly all of them practise other religions, or no religion at all.

The confusion is understandable as the term Inshallah, which of course means “God willing” in the Arabic language, is such an everyday Muslim expression.

According to Debbie Lou Ludolph, the choir’s founder and director, “Inshallah” was chosen to honour the origins of the choir, which was founded during a Waterloo Lutheran Seminary study tour of the Holy Land in 2007.

“Inshallah was a term that we heard regularly among Palestinians,” Ludolph says. “It was the people of Palestine who asked us to go home and sing their songs as a way to tell their story.” 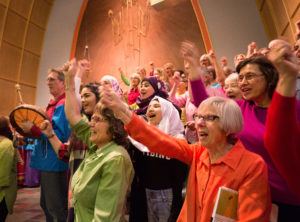 “With the Islamophobia being spread at the current time, it is especially helpful to have an Arabic name to counter the rhetoric,” Ludolph says.

Inshallah’s vehicle for countering such destructive rhetoric — in short, for building peace and social justice — is music.

“Music is such a powerful tool for creating spaces where we can imagine how we can be together and find our common humanity by, in part, embracing the fact that we’re different,” says Ludolph. “We don’t listen to each other’s realities very well,” she adds. “We often judge others’ realities.”

When choir members gather to learn new songs, they have to listen and take to heart important messages from other cultures. And when they collaborate on events with various local groups — past partners have included Indigenous, Latino, Korean, Chinese, East African and East Indian groups — Inshallah members learn about pains and struggles their neighbours endure, but also about their gifts and contributions. Each event produces ripples throughout their communities, says Ludolph, a faculty member at the seminary.

For example, the lineup for the most recent event, Singing with our Neighbours which was held at St. John’s Lutheran Church in Waterloo, was composed of Inshallah; the Inshallah Kids choir; the Indigenous group Mino Ode Kwewak N’gamowak (Good Hearted Women Singers); and a group called Crossing Borders whose members are mostly high school students who are Syrian refugees.

Together they sang — in English, Hebrew, Arabic, Swedish and Zulu — in a Christian church. Inshallah members helped Muslim teenagers follow the music. The Indigenous circle had already taught Inshallah a lullaby remembering children in residential schools. Children singing with Inshallah Kids multifaith choir made playdates with each other. Teenaged Syrian refugees, and their friends, expressed lament through spoken word. And their parents greeted people as they arrived at the church door. 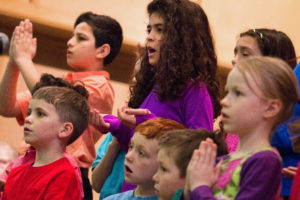 About 500 attended the event and donated $2,000 to help Crossing Borders and Mino Ode Kwewak N’gamowak in their peacebuilding work.

But it’s not just about the money, says Ludolph, reflecting on the recent event. “It’s about building relationships. “There’s a sense of hope,” she says. “Even if it’s only for that hour and a half.”

To learn more about the Inshallah choir and Inshallah Kids, go to inshallah.ca

Break the Fast with the Muslim Women of KW