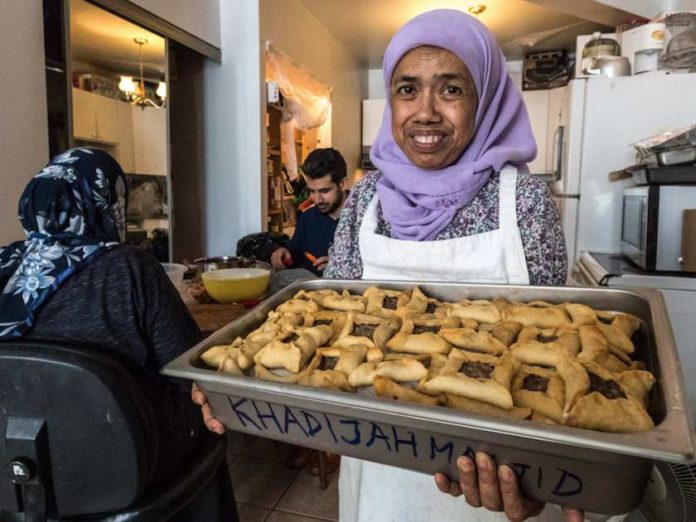 “Sorry if I smell like curry,” she says, laughing.

It’s about 3:30 on a warm Thursday afternoon — three large rooms, each equipped with kitchens,have lentil soup simmering on the stove or meatballs and tart shells baking in the oven, making it hotter inside the apartment than it is outside. All fans are on and windows open.

Meanwhile, volunteers roll meatballs at a table, lining them up on metal platters. They bustle through the corridors, making sure the meals will be ready in time for 5 p.m. when volunteers from River’s Edge Community Church will pick up the food to serve 150 people in need at the church.

But that’s not all. The volunteers, including Sabariah Binti Hussein, are also cooking for 230 other people split among five mosques for iftar. It’s the meal consumed by Muslims once the sun sets to break their fast during the holy month of Ramadan, which began on May 26 at sundown. The first fast occurred on May 27 and Ramadan is expected to end on June 24.

Every now and then, a volunteer comes knocking on the door of the bedroom in which we are chatting, providing her with updates on their cooking or notifying her of their arrival and asking what they can do to help. Everyone calls her Sister Sabria, spelled the way its pronounced. She prefers to be called Sister Sabria or Sabariah. In Malaysia — her country of origin — last names often refer to the father’s first name. Binti means “daughter of” and Hussein is her father’s name.

Sometimes, Sister Sabria leaves the room to make sure everything is moving smoothly. She then comes back, apologizes for her absence and says: “Go ahead.” Perched on the edge of her bed, we continue chatting until another volunteer knocks on the door and the smell of fresh food entertains our nostrils once more.

Nothing comes in the way of the 70-year-old’s volunteer work, not an interview or even the chance to meet Prime Minister Justin Trudeau; an acquaintance of hers insists he could have arranged a meeting between the two since Trudeau was in Montreal recently. She declines, having made prior commitments to filling empty bellies.

Sister Sabria’s involvement in the Montreal community dates back 30 years, when she arrived in Canada after completing international cuisine courses in Kuala Lumpur, the capital of Malaysia. As a devout Muslim, she is heavily involved with the Muslim community, cooking thousands of meals for mosques spread throughout the city. She lends a hand to anyone in need, regardless of race, religion or sex, working closely with River’s Edge Community Church and Unity Church, both located in N.D.G. She also runs her own women’s shelter from home, called Our Second Home.

“In Islam, you have to be united, more than ever,” she stresses. “That’s why I want to do something good. I’m not seeking popularity, but I want people to know that we Muslims are good people, too, that we do a lot, too.”

She has devoted her life to helping others, placing their needs before hers. It’s a full-time job — and she doesn’t even get paid for it. Her sole source of income is the food she sells after Friday prayer at Ummah mosque on St-Dominique St., which she stops during the holy month of Ramadan.

“I consider this a job with Allah because I’m not paid,” she says.

Religion and helping others have always been an important part of Sister Sabria’s life. Born in Johor Bahru, which is the capital of Johor, a province in the south of Malaysia, she moved to Singapore at the age of three or four because her father, a teacher, found employment there. Both her parents were devout Muslims. She was the third of six siblings. Even with a crowded home, their family grew from eight to 18 because they would open their doors to everyone — some were family members and friends going through difficult times, while others were people who simply needed a place to call home. They would eat, sleep and spend time together like any other family.

“It’s like an orphanage because my cousin lost her husband and the children stayed with us and so we end up like 18 of us,” she says.

She has continued a similar tradition with her women’s shelter. Her door is always open, much like her heart.

And let’s not forget the 20 volunteers who assist Sister Sabria with her needs throughout the day. Many of these volunteers are students from Concordia and McGill universities. Others meet her at mosques or hear of her through a friend or social media, like Emina Velovic. Originally from New York, this is Velovic’s first time helping Sister Sabria during the month of Ramadan.

“I feel like it changes you spiritually,” Velovic says as she pours lemon filling into tart shells. “Because you’re not only just fasting — because it’s the sake of the holy month — but you feel like you have a purpose, like you’re actually helping to feed others and contribute to something that’s a really, really good cause.”

Sister Sabria’s petite frame betrays the grandiosity of her gestures. For a woman in her 70s, she doesn’t look a day over 50 and her energy is remarkable. She thanks her volunteers for giving her energy everyday.

She also derives much of her liveliness and well-being from religion. She has faced death on a few occasions, having experienced two mild strokes in 2004 and 2005. Sister Sabria was asleep the first time it happened. She had just finished fundraising for victims of the Indonesia tsunami and hadn’t slept in three days.

She recalls telling her husband to not wake her up no matter what — so, like any good significant other, he listened. Sister Sabria slept for three days straight.

“I told my husband ‘why didn’t you wake me up for prayer?’ I didn’t say (anything) about food, I said about prayer,” she says.

She found out a year later — after suffering her second stroke — her three-day sleeping episode was actually a coma. Her doctor performed a brain scan and detected a blood clot.

Her actions extend beyond borders as well. She is working closely with Human Concern International, a Canadian-Muslim charity helping her fund an orphanage to assist the Rohingya population, a minority group that identify as Muslim and are persecuted.  So far, she has raised $ 78,000 and needs another $ 70,000 to purchase and renovate a building that will be transformed into an orphanage. She will be holding a fundraising event on Aug. 5 in Ottawa at the Human Concern International headquarters.

Sister Sabria has two dreams. The first is to start an organization to “help the needy, the homeless, the ones that really need help.” She would love to see youth take on this initiative. Even with all her energy and devotion, she realizes it might be time for someone else to take over her work, but knows it’s not an easy feat.

Until that day comes, she will keep cooking, donating and doing whatever it takes to make others feel welcome, safe — and full.