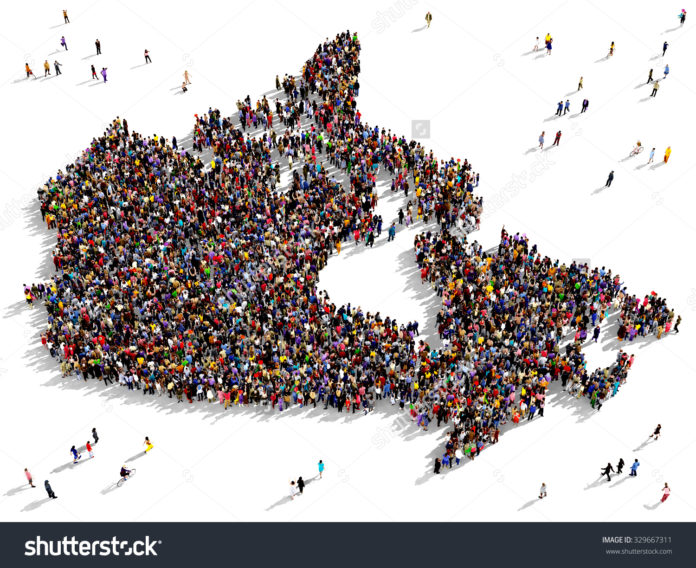 When I walk down the hallways of my high school I see the graduation pictures of students from many years ago. My eyes fall upon a sea of blonde hair and pale faces. These graduation pictures reveal the diversity, or lack there-of, of Canada’s past. However, when I walk into my classroom of fewer than 30 students, I see people of different cultures, backgrounds, and ethnicity. I never noticed how diverse and different we all are, as everyone always seemed to belong. Despite the differences between us, we are all Canadian.
Canada is infinitely more diverse now than it was a few decades ago: Canada was once a place where every-one looked the same, talked the same, and dressed the same. Everyone had the same traditions, hobbies, and interests. Now Canada is known as a country of immigrants. Every year over 250 000 immigrants from around the world choose Canada as their next home (Carlson 2011). These immigrants bring with them the traditions and customs of their home countries, resulting in the constant altering and remodeling of the Canadian identity and the stereotypical Canadian lifestyle.
My parents are two of these immigrants. They had fears of being unable to assimilate to the Canadian culture once they arrived in Canada. However, these fears were needless. Their cultures and traditions were respected and honored, and they were not forced to assimilate into an ideal Canadian. They quickly learned this when they saw a Canadian television program had the show How to be lndie. They couldn’t believe that a Canadian television program had a show about an Indian family.
Despite coming from a country halfway across the world, my parents and I are still able to partake in the same practices and traditions that they were able to do back home. I am able to fast the month of Ramadan and celebrate Eid without any discrimination or prejudice. Never have I been called less of a Canadian based on my beliefs, ideals, or traditions, and never have I heard someone else been called this.
Unlike many other countries, Canada prides itself on its multiculturalism. Countries such as the United States of America refer to themselves as a melting pot; immigrants are expected to abandon their cultural practices and assimilate to the American ideal. In contrast, Canada is as a multicultural mosaic; cultural diversity is not only accepted, but encouraged. We won’t build a wall to keep people out. Canadians are expected to learn from, and embrace the different cultures and traditions found in each Canadian individual.
With Canada being composed of people from all over the world, with every background, tradition, and culture being accepted and embraced, how would I define the Canadian identity? The Canadian identity has no clear definition. Canada is a country of immigrants. It is a home for people from all over the world, with different values, beliefs, and ideals, none being more Canadian than another.
Every morning when I hear the words “Our home and Native Land,” I know that this isn’t really my native land. I know that I am an immigrant. However, I also know that even if I wear different clothes, eat different foods, or speak a different language, my identity as a Canadian will never be questioned: in Canada individuality is welcome.
In Canada you are not looked down upon if you are different, as everyone is different. A white person does not represent the Canadian identity more than an Asian person, and an Asian person does not represent the Canadian identity more than a white person. Celebrating Christmas doesn’t make you more of a Canadian than someone who celebrates Diwali.

Canada strongly believes in the multicultural mosaic. There is no identity that one has to conform to in order to fit in as a Canadian, as Canada was created from the plethora of differences that make each of us unique.
Works cited:
Carlson, Kathryn Blaze. “Immigrants Cost $23B a Year: Fraser Institute Report.” National Post. N.p., 17 Mar. 2011. Web. 02 Dec. 2016