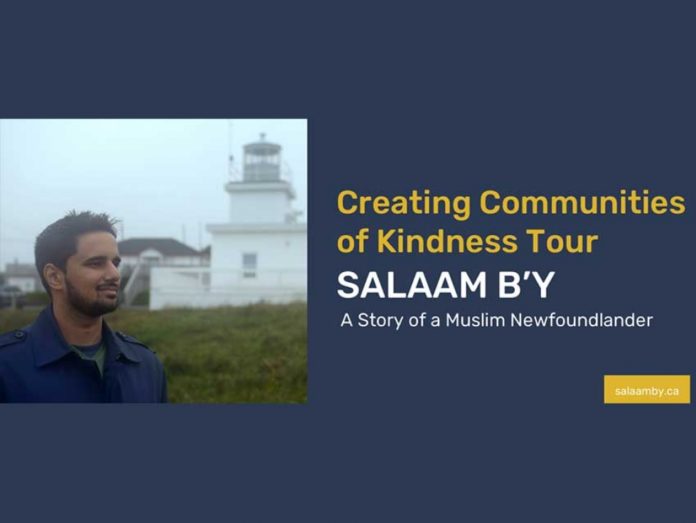 Her Majesty Queen Elizabeth II has [on February 3, 2020], recognized Edmonton resident, Aatif Baskanderi, as the Canadian award winner of the Commonwealth Points of Light in honour of his exceptional voluntary service advocating for community cohesion and interfaith understanding.

Inspired by his own experience growing up as a Muslim in Newfoundland, Aatif set out on a journey to recount his story of pluralism and tolerance, sharing with thousands of people a message of social inclusion and the importance of empowering people’s unique identity, particularly young people. His tour was documented in a short film ‘Salaam B’y – A Story of a Muslim Newfoundlander’ which has received global recognition and has been screened in almost 30 cities around the world.

Aatif is now sharing his message of kindness in Canadian schools, with his story now part of the school curriculum in Newfoundland.

By sharing these stories of service, the Commonwealth Points of Light awards celebrate inspirational acts of volunteering across the Commonwealth and help inspire others to make their own contribution to tackling some of the greatest social challenges of our time.

Each Commonwealth Point of Light will receive a personalised certificate signed by Her Majesty The Queen as Head of the Commonwealth. The award for Aatif was presented on 3 February 2020 at McDougall Centre by Her Honour, the Honourable Lois E. Mitchell, Lieutenant Governor of Alberta and British Consul General, Caroline Saunders.

Aatif said: “I am honoured to receive this award alongside a group of amazing global community leaders who give their time and effort to make the world a better place. The Points of Light brings to the stage the kindness that is in the world, which is especially needed these days when society seems so fragmented. However, what you find is when you enter these communities, there are countless wonderful people putting kindness to action through all sorts of ways. I have found this as I travelled across Canada and the world, and the Points of Light does just that – highlighting kindness around the world.”

Her Honour, the Honourable Lois E. Mitchell, Lt. Governor of Alberta said: “The wonderful Canadian and Commonwealth values of partnership, diversity and understanding that Aatif’s film brings to light are a reminder of the strength that comes from communities and nations working together in peace and friendship. His film is something that speaks to us all, and I’m very proud of the work he is doing to share his very important and timely message with audiences around the world.”

The Commonwealth is a diverse community of 53 nations that work together to promote prosperity, democracy and peace. The Heads of Government meeting brought together leaders from all the 53 Member countries to reaffirm common values, address shared global challenges and agree how to work to create a better future for all citizens, especially young people. Voluntary service is a vital part of this agenda, which is why Her Majesty The Queen has chosen to recognise outstanding volunteers across the Commonwealth in this special way.

About the Commonwealth Points of Light Award

The Points of Light awards recognise outstanding volunteers every day of the week – people whose service is making a difference in their communities and whose story can inspire others to creative innovative solutions to social challenges in their own communities and beyond.

Points of Light began in America under President George H. W. Bush and today over 6,000 US Points of Light have been recognised. The scheme has the support of all living US Presidents.

Since 2014 the UK Prime Minister has been recognising a daily Point of Light from the UK, with over 1,200 volunteers now recognised.

Nobody Cares About Black Muslims