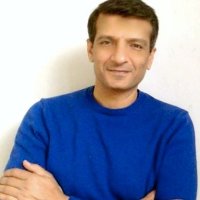 Arlene from Mumbai was the last person my wife, and I expected to meet at the Gospel Church in Waterloo. She reminded me of the Bollywood movie stars from the classical Indian cinema; when I told her their names, she laughed.

I was raised in Pakistan, in the city of Lahore, which bordered with the Indian city of Amritsar. The proximity had allowed us to catch the Indian National TV transmission by setting the direction of our TV antenna to the East. The early eighties were a time when in India, as in Pakistan there was only one state-owned television channel and the daily transmission lasted from early evening till midnight. Doordarshan was the Indian and PTV the Pakistani national television channel. Spinning the antenna between India and Pakistan, at least, three times every evening and probably over a dozen times on a windy day was our exciting daily evening routine. The Bollywood movies and songs, the weekend classical kathak dance program and the daily evening and late night news were some of the most watched Indian programs in my family.

Pastor Klaus had kindly invited us to the Gospel Church in Waterloo to attend the Advent Fellowship Meal. We had first met him a week before at the Our Stories –Lets’ Connect workshop I had conducted at the Victoria Hills Community Centre. “When I reflect on it, I believe that God by His Spirit orchestrated these connections,” Pastor Klaus wrote to me later in his e-mail.

As Pastor Klaus announced some new fellows in the church that Sunday, we received instant attention and plenty of love and respect. Everyone present made certain to give us warm handshakes, loving hugs, and kind blessings. Within no time, we transformed from strangers to family members.

I saw Arlene inside the prayer hall the moment we arrived at the entrance door. A reflexive and characteristically passionate, Indian or Pakistani hug– actually there is no difference between the both– and Arlene led us to the pews. “You would sit with me today!” she declared.

After the service, when Pastor Klaus picked up his guitar and announced the singing of the hymns, Arlene guided us where to find the hymns book, the page numbers, and the sequence to read. Pastor Klaus was simply. In between the hymns, Arlene and we would get to talking like little kids. There was so much to talk. As they say in Lahore, it takes a Lahori to understand a Lahori!

Arlene was born in Lahore and only seven years old when the partition of India and Pakistan had struck in 1947.

The announcement of the separation had ensued one of the greatest mass migrations in history. Fourteen million Hindus, Sikhs, and Muslims were displaced.

Millions of Muslims struggled to move to Pakistan, and millions of Hindus and Sikhs to India. Hundreds of thousands of them never made it.

In the riots that preceded the partition of Punjab, between 200,000 and 500,000 people were killed. Lahore in the Pakistani Punjab and Amritsar in the Indian Punjab were the epicenters of violence. Arlene and her family had to go through it all to make it to the safety of Bombay in India. “I like Bombay more than its new name, Mumbai,” Arlene told me. “Me too,” I agreed.

She was keen to learn about Lahore where her childhood home was at the Empress Road; I had grown up not far from there. We were keen to learn about her story of migrating to India, what happened then, was she a Bollywood star, how did she end up in Canada… She wanted to know simply everything about us.

For a while, I was like the little kid trying to fix the antenna direction to the East. Arlene, as in a typical Bollywood movie theme, was like the mother who had just found her kids she had lost in a carnival many years ago. Our bond was instant and profound.

In the dining room, Arlene sat next to me and had my wife sitting next to her. “German desserts are the best in the world,” she whispered. Our excitement was contagious and spread immediately to Mary sitting next to us. “My original name was Maria,” she told us. “But when I came to Canada, Mary sounded more local, so I changed it.” Our Indian-Pakistani stories of the past got Mary to reminisce her past too. “I was a very hardworking farmer back in Germany. You know, when I came to Canada, I found out that the farmers were very well-respected here,” Mary laughed. At this point, John also joined in the discussion, and we learned about his specialization in the now almost extinct languages.

A small group of people began to form around us. Our cultural backgrounds varied, we were from one religion or another, and we spoke many languages. Our laughter came right from our hearts, and there was not a moment of worry during those blessed moments at the Gospel Church that Sunday while we shared our stories and connected!