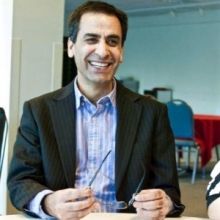 Violent conflict resulting from increasing intolerance is becoming the defining features of the world today. Around 1.5 billion people around the world live in fragile or conflict-affected states, including over 600 million young people. Violent conflict disrupts social structures, breaks down the rule of law, and cripples health systems. It has a devastating impact on young people’s development, human rights, and their ability to reach their full potential.

More people are on the move today than at any time since the Second World War. The world is learning at great cost the risks posed by violent extremism when left unaddressed. While developing countries bear the heaviest burden of accommodating refugees, their impact is being felt in developed countries as well.

Recent political events, including highly divisive elections in the US and an increasing support for the populist and nationalist parties in England, France, Turkey and India have created an environment of rising intolerance and xenophobia. In a time of social, political and economic chaos, Canada’s pluralism and multiculturalism are seen as one of the few bastions resisting this global tide of intolerance and xenophobia. 1 in 5 Canadians is foreign-born, and two thirds of Canada’s population growth is attributable to international migration. Canada’s population is over 35 million, of which over 10.2 million are children and youth.

However, there is some evidence that attitudes may be hardening in Canada too. A survey by the Angus Reid Institute in February 2017 found that a “significant segment” of Canadians say Canada’s current refugee target of 40,000 is “too high”, while one in four Canadians wants to impose its own Trump-style travel ban on refugees. Many Canadians are becoming more fearful in the aftermath of attacks against visible minorities, including the recent violent attack on a Quebec City mosque that killed six innocent worshipers and wounded many.

The Youth4Peace Canada initiative seeks to strengthen the foundations of Canada`s positive experiences with multiculturalism, and share its unique example with the rest of the world. Through boot-camps, we equip young women and young men with leadership and peace building skills, and support them to transform inter-personal and inter-group violence in communities across Canada. We believe in the potential of young Canadians to lead the charge to build resilience and peace in their communities. We, the Global Peace Center Canada, along with our partners in universities, civil society and the United Nations Working Group on Youth for Peacebuilding, are committed to providing the necessary tools and resources to unleash their potential. Together, we can boldly share the Canadian example for the rest of the world.

For more information on our work, upcoming activities, and how to get involved, get in touch!