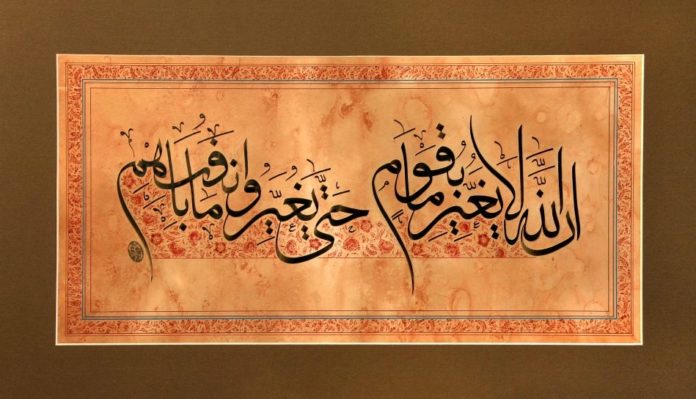 This Qur’anic aya (verse) has been a centerpiece for many sermons in mosques throughout the world for centuries as Muslims have tried to figure out what has gone wrong with themselves so that God will change the fortunes of Muslims from being a conquered, oppressed, and/or reviled people to a people who, in the very least, are living in relative well-being.

One of the answers as to what is wrong “within their selves,” which Muslims must change, an answer that was promoted by Ibn Taymiyya and that has been continued by Salafis and Wahhabis, is that the religious practice and lives of Muslims are filled with bid’a (innovations). Hence their hatred for and efforts to rid the world of Sufi beliefs and practice, which they regard as bid’a. These Salafi and Wahhabi polemicists, ironically, resemble the Jewish Pharisees at the time of Jesus, who believed that the key to salvation needed to be strict observance of the letter of God’s law, and who consequently saw Jesus’ preaching as undermining their chances of salvation and hence vehemently opposed him (since Jesus taught that what was necessary was the fulfilling of the spirit and intention behind the law, rather than the letter or literal and strict observance of it).

In recent years, especially in the U.S., a far more benign solution, in contrast to that of the salafis and wahhabis, a solution that has been advanced by other Muslims is that what is wrong is that Muslims are relatively ignorant (jahil) of the deen (religion) and, hence,in order for God to “change their conditions,” they need more knowledge (‘ilm) and specifically they need more Islamic legal knowledge (fiqh) and to a lesser degree more orthodox Islamic theological knowledge (‘aqida). Hence events such as “deen intensives” and similar workshop-like courses in all aspects of shari’a and orthodox Islamic theological doctrine have proliferated in the United States.

While on the one hand, such workshops often fill young American Muslims’ need for community, unfortunately they do little to fill the needs of such Muslims’ hearts. Aside from the dry rabbinic-like emphasis on law and abstract concepts of theology, another reason why some young American Muslims feel that something is missing is that at such events there is often an undercurrent that is dismissive of Sufism or at least is dismissive of Sufis who do not emphasize law and orthodox theology.

In contrast to such solutions to the problem of what is wrong with Muslim practice, there is a strong current in traditional Sufism, such as that advanced by Mevlana Jelaluddin Rumi, which asserts that what is needed is more unconditional love of God at all times and especially when Muslims run up against circumstances in which they are suffering.

One retated problem which I think Rumi addresses (although I’ve forgotten the particular lines of poetry but which I intend to look up) is that one reason why we do not love God unconditionally is that our selves unconsciously are attached to, worship, and love many qualities other than God. In terms of standard Islamic practice, although Muslims say “la ilaha illah Allah” (No deity but God), in fact Muslims (like everyone) have a plethora of “gods” or pseudo-gods (ilahs) to which they are devoted, albeit unconsciously, “gods” such as health, happiness, security, success, beauty, power, respect, knowledge, the list is endless.

So what is wrong is that Muslims need to become aware of their pseudo-gods– which Sufism traditionally terms forms of shirk khafi (subtlly giving God partners)– when they remember “la ilaha” and, accordingly, if they want to move toward a more unconditional love of God with “ill Allah”, they need to relinquish their hold on their pseudo-gods while gratefully embracing God, who is their all-emcompassing Beloved and Source of Constant Unconditional Merciful Love (rahma).

Of course, gratefully surrendering their pseudo-deities into the embrace of God, the All-Encompassings and Unconditionally and Mercifully Loving Beloved does not mean abandonning the pursuit of virtues, which are a lesser but still necessary form of effort (jihad).

Fortunately, the way back to love of God and the way of relinquishing ones compulsive worship of such deities, the way pointed to by la ilaha ill Allah, is clear and simple. It is simply to respond to one’s awareness of one’s pseudo-deities (and the fear of their absence), first by relinquishing one’s grip on them while one remembers la ilaha, and then by a sip of a grateful breath, in gratitude for the possibility that one’s beloved God is all-embracing, embracing even one’s worship of pseudo-deities and fear of not having them.

While this worship of pseudo-gods (ilahs and shariks) and the grateful embrace of the all-inclusive God whose Merciful Love is all-embracing needs more explanation, I will leave that for another time.

Fariha Naqvi-Mohamed: Muslims Around The World Are Fasting For Ramadan