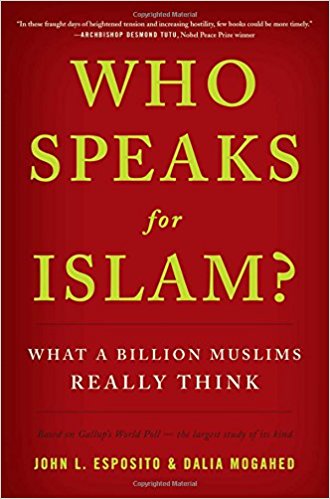 “Who Speaks for Islam?
What Do 1.3 Billion Muslims Really Think?”

To date, many have spoken for Islam: experts, apologists, extremists, politicians, religious leaders, even fiction writers. In this cacophony of voices everyday Muslims have remained silent. Many have speculated on their silence, promoting causes and foreseeing the clash of civilizations and the end of world.

The silenced majority of Muslims have spoken for Who Speaks for Islam? written by John L. Esposito, professor of Islamic Studies at Georgetown University and Dalia Mogahed, a senior Analyst and Executive Director of the Gallup Center for Muslim Studies, provides a comprehensive analysis on a multiyear, mammoth, Gallup poll data – “the largest study of its kind” – which attempts to answer popular questions such as: Is Islam to blame for extremism? Why is there so much anti-Americanism in the Muslim world? Who are the extremists? What do Muslim women really want?

The Gallup Institution surveyed over 55,000 Muslims in over 35 Muslim populated countries. When we ponder on the role this data may play in the betterment of relations with 1.3 billion inhabitants of the world, we can’t help, but appreciate in depth the painstaking efforts shown in this project. Readers can also read about the challenges and method of the survey at the end of the book.

Most of the answers of the surveyed go against the popular perceptions and shed light on the level of misinformation and distortion we all are exposed to, reminding us one more time of Einstein’s advice that a man should look for what is and not for what he believes should be.

Constructed in a comprehensive design and plain language, the data can easily be grasped by say, even the statistics illiterate. Every effort is made to ensure a wider readership.

The book is organized in five chapters under five crucial questions:

Who are Muslims?
After exploring the five pillars of Islam (i.e. profession of faith, prayer, fasting during Ramadan, almsgiving, and pilgrimage to Mecca), the books touches upon sensitive issues such as the meaning of jihad, the role of family and culture in Islam, nostalgia for a glorious past, and politics.

Democracy or theocracy?
Many important questions are tackled in this chapter such as: Why is democracy absent in so much of the Muslim world? Is Islam the problem? How do Muslims view democracy? Should support for Sharia make the West panic? What do Muslims believe the chances are of improving relations with the West? Many Muslims view democracy as necessary for progress but skeptical about America and Europe’s intentions in promoting democracy in Muslim countries.

What makes a radical?
Extremists and terrorists were thought to be uneducated, poor, religious fanatics who reject modernization and technology, yet within weeks of 9/11, the media reported the “stunning discovery” that many of the attackers were, like Bin Laden and Dr. Ayman al- Zawahiri, well educated (some of them in western universities), middle to upper class, and from stable family backgrounds. Investigating diagnosis and misdiagnosis, this chapter explores the causes of extremism based on poll data.

What do women want?
When asked by the Gallup Poll of American households, “What do you admire least about Muslims or Islamic world?” American women answer “gender inequality” as among the top responses. Many have engaged in struggle to liberate the Muslim woman, yet her voice rarely makes its way in the discourse.

Interesting answers are given by Muslim women to questions, like: How do Muslim women feel about Islam and the Sacred Law (Sharia)? Do they want to be liberated by the West? How do they view gender equality?

Clash or coexistence?
Confronting myths vs. realities, this chapter offers insights into what can be done to end global terrorism. The ability to move beyond presuppositions and stereotypes in our attitudes and policies and to form partnerships that transcend an “us” and “them” view of the world is critical to this cause. According to data findings, public diplomacy, defined as winning minds and hearts, is required.

Finally, here is a trial size bite from the book without spoiling it. There is a prevalent assumption about Islam and democracy being incompatible. Yet that the majority of the respondents declared democracy as one of the things they admired most about West.

Another impressive finding of this book was the answer Muslims gave to the open ended question: What can the West do to improve relations with Muslims? The answer was: Show respect.

Respect comes with better understanding and reading Who Speaks for Islam? may be an important step toward it. What do you think?