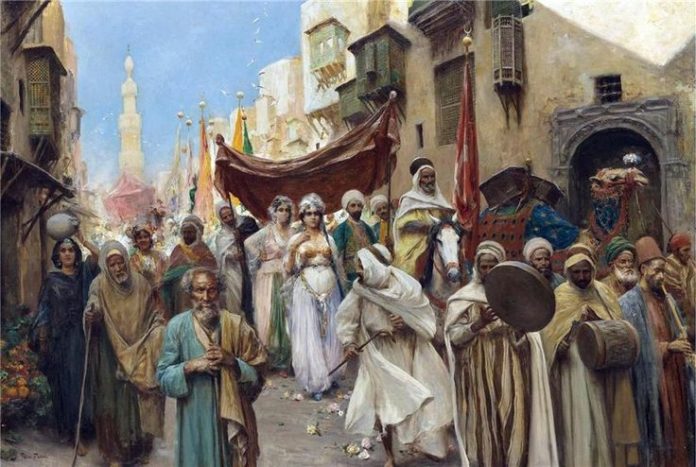 After the period of the Crusades, a more direct and close encounter took place in the 19th century when, for political, economic and cultural reasons, the West invaded the East. In the 19th century, post-Crusades Europe’s desire to assert itself against its Islamic rival converted easily into a determination to dominate. In order to realize this aim, European politicians and administrators generally turned, as if to official documents and data, to the travel writers who were actually in charge of different missions. Thus, they resorted to travellers’ misjudgments and speculations about the religious and cultural values of the Middle East. There values come overwhelmingly from Islam which is perhaps the single unifying factor among the different ethnic and national groupings in the region.

Hostility to Islam and Muslims was an integral part of most of the travellers’ mental makeup. David Roberts, a painter of the idealized landscapes of classical ruins, expresses his frustration in a dislike and hatred of Arabs whose forms litter the otherwise perfect scene: ‘Splendid cities, once teeming with a busy population and embellished …with temples, now deserted and lonely, or reduced by mismanagement and the barbarism of the Muslim creed to a state as savage as wild animals by which they are surrounded. Often have I gazed on them till my heart actually sickened within me.’1

As ‘the idea of travel as a means of gathering and recording information is commonly found in societies that exercise a high degree of political power, the traveler begins his journey with the strength of a nation or an empire sustaining him (albeit from a distance) militarily, economically, intellectually and, as is often the case, spiritually…’2

In 19th century travel accounts, the more routine designation of the Orient is feminine; its main symbols are sensual women, the harem, and the despotic -but curiously attractive- ruler. Moreover, Oriental women, like Victorian housewives, were confined to silence and to unlimited service. The English woman traveller, Miss Irby, who travelled throughout the Ottoman regions, defines the proper place of the oriental women:

‘To the Musulman, a woman was an inferior being, a chattel, to be bought and sold, kept secluded behind the screens of the women’s quarters, or, if produced in public, to be hidden behind the draperies of the litter, or muffled and secreted in long shapeless robes, face covered by the veil; the property of the man as was his dog, his servant, his horse, to wait on his pleasure, to sleep at his feet; yet withal, if the husband be rich, to be cossetted and adorned with jewels and fed with sweetmeats, to spend days in idleness and chatter.’3

In various 19th century Oriental books and tales like Vathek, the Giaour and Don Juan (especially Cantos 5-8) which are more or less fixated on the images of the Oriental harem, the figure of the veiled Eastern girl symbolising the colonial Other is created by a narrative structure in which a male subject’s attempts to liberate a female object from the tyranny of the harem is interrupted or arrested by a stereotypical patriarchal aggressor who prevents the achievement of narrative desire in the possession of the woman. In other words, the Orient is thus refigured as the harem fantasy of European imperialism that shows ‘the East’ as the obscure object of Western desire. The narrative structure of Vathek designates the Orient as a feminized place invaded by the masculine subject.

Reza Hammani and Martina Rieker criticize Ghoussoub’s Marxist approach which deprecates Islam as not good for women. However, they agree that Middle Eastern feminism is vitiated by its involvement in debates whose agenda was set in 19th century travel writing. They develop this idea further with the following explanation:

‘Two issues have dominated Western discourse about Middle Eastern women since the 19th century; the veil and the harem. The harem continues to be treated as a contemporary reality in popular mythology. Thus, Gloria Steiner cites freeing Saudi women from harems as one of her fantasies in her autobiography – we wish her luck in finding a harem in Saudi Arabia. Moreover, it is above all the veil which remains a central preoccupation… The veil is not always imposed; in many contemporary instances women have been instrumental in assuming it. This is not a matter of relativist interpretations but of power… In the case of women in Egypt since Sadat’s Open Door Policy, large numbers of working-class women have themselves mobilized to veil to signify their opposition to the regime.’4

Irene L. Szyliowicz remarks that historians and social scientists arc demonstrating that the traditional portrayal of women in these societies has been biased and based on Western judgements. European ethnocentrism and male chauvinism have combined to account for this phenomenon.5 As she thinks that French travel writer, Pierre Loti’s attitude toward Oriental women is particularly worth studying for several reasons, she points out in her Pierre Loti and the Oriental Woman (1988) that ‘since all the Oriental women essentially support and ratify their Occidental lovers, it is proper to conclude that Loti created these fictional characters as wish-fulfilment fantasies, to simultaneously reinforce and magnify his manhood.’6 When Loti made a speech titled ‘La Femme Turque’ (the Turkish Woman) before a large gathering of European women in the conference on ‘Feminine Life’, he concluded with a message: ‘Open the cages, open all the harems. Yet, don’t open them too quickly, for fear that the young, imprisoned birds should take a frantic flight before knowing properly where their inexperienced and fragile wings will take them.’7 According to Loti’s interpretation of Oriental women, which is quite similar to that of Byron, one might imagine that ‘they could be manipulated easily by their dominating masters, and further, this masculine paradigm presented these women, like their Occidental sisters as actually craving male domination.’8 Eventually, in the case of Oriental or exotic women created by Loti, the reader faces a different form; they are simple, primitive, dependent, often helpless, and they worship the hero as though he was God. ‘And despite the fact that he was still a product of his Occidental milieu and the prejudices with which he was raised, he prided himself on his objectivity toward various lands which he visited.’9

In sum, from the previously quoted remarks by 19th century travellers, it may be concluded that the most general point about travel literature (something also confirmed by Sir John Mandeville’s Travels) is that travel is undertaken for a great variety of purposes; the specific purpose involved in a given case is always, to a greater or lesser degree, determinant of what is noted or considered noteworthy. Consequently, the attention paid by the writer of a travel book is always ideological. A traveller usually comes from somewhere – from a country from a language community, class – and consciously writes the record of his journey for a particular public in the country he came from.10