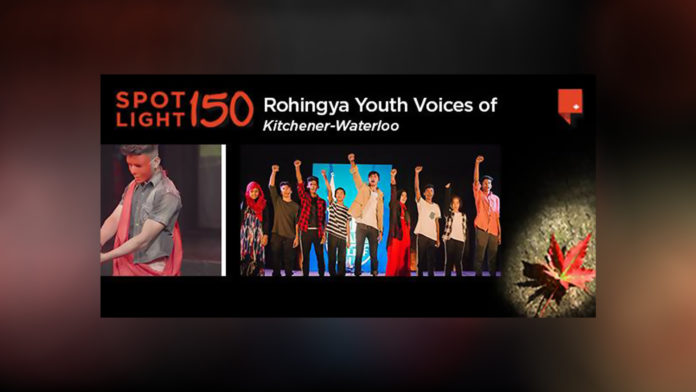 ROHINGYA youth voices of Kitchener- Waterloo is in the running for the National Council of Canadian Muslims (NCCM) Spotlight 150 Awards.Please see the link below and vote for them and their powerfully moving ethnographc play “I am Rohingya” a project sponsored by Muslim Social Services of KW and co-written and directed by Yusuf Zine. These young people deserve the recognition for their bravery in telling the story of the Rohingya crisis and the impact on them and their family. Please vote and spread the word!!

Description of the Project:

In the summer of 2015, a group of Rohingya refugee youth (ages 8-22) from Kitchener, Ontario decided enough was enough. No longer would the plight of their people be ignored by the media and the international community. Together, they opted to share the stories of their families’ harrowing escape from Burma, chronicling what life is like living in a refugee camp and portraying the struggles of resettling in a new country. At that moment, “I Am Rohingya” was born.
I Am Rohingya is a play chronicling the harrowing Rohingya refugee experiences told from the perspective of the Rohingya Canadian youth community. Based on the stories told by the Rohingya youth, the play takes the audience through a timeline of Myanmar before the violence to the forced migration of Rohingya Muslims to Bangladesh, and finally resettling in Canada. This is a powerful and emotional drama about life, loss, violence, and hope that chronicles the lives of ‘the most oppressed people on Earth.’
Since the summer 0f 2015, these youth have been working extremely hard to make their stories heard. Opening night was April 2016 to a sold-out audience in Waterloo.
Getting attention from CBC, Rohingya Vision TV, and even getting the chance to meet Prime Minister Justin Trudeau, these youth have surpassed expectations and made a name for their people.
With no prior acting experience, the decision to re-enact the stories of their people was a courageous act of resistance, demonstrating to the world that they will not be erased, and they will not be forgotten.
With so many refugees coming to Canada and fleeing horror, it is important that we as Canadians remember that they have a story to tell, a voice and a unique way of expressing it.
“I Am Rohingya” is an example what can happen when refugees take control of the narrative for themselves and redefine what it means to be a “refugee”.
Through this project, the Rohingya youth community have a felt a sense of agency in creating social change and awareness for the plight of their people.

Career and Kids: Can I Have Both?

Inshallah: Singing for Peace and Justice