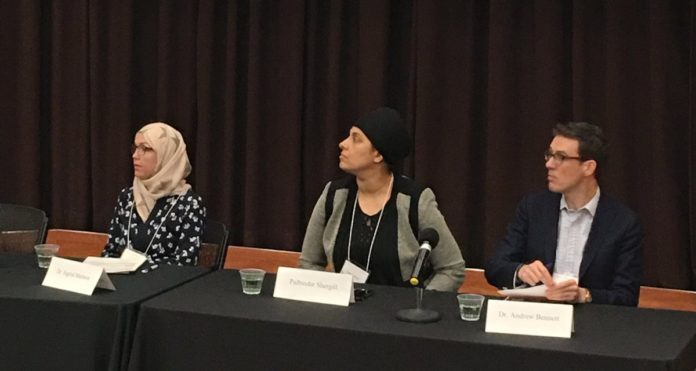 Religious and civic leaders, as well as academics and public servants, gathered at Saint Paul University in Ottawa on May 8- 9 to talk about how Canadians can invigorate civic participation through greater inclusion at a conference themed “Our Whole Society: Religion & Citizenship At Canada’s 150th.”

“True diversity must accept difference, including the right to hold different theological, ethical and moral beliefs,” said Dr. Andrew Bennett, Senior Fellow at Cardus, in the opening plenary titled, Solidarity in Diversity. “The right to profess different beliefs must be upheld even if they contradict the prevailing spirit of the age.”

The conference was organized under the auspices of the Canadian Interfaith Conversation in partnership with several Conversation Participants, Canadian Race Relations Foundation and Cardus’ Faith in Canada 150 project.

“The purpose of this conference is to inquire into the relationship between religion and citizenship at the 150th anniversary of confederation in Canada,” said the organizer, the Canadian Interfaith Conversation. “This initiative builds upon an ongoing effort to foster a new conversation about religion and secularism in Canadian public discourse, which included past conferences at McGill University in 2013 and the University of British Columbia in 2015.”

“Today, however, we are one of the most diverse societies in the world,” noted the organizers. “Most Canadians continue to profess some kind of religious belief, and we have significant populations of every world religion, as well as large numbers of atheists, secular humanists, and the spiritual-but-not-religious.”

“A welcoming society is different from tolerant one,” said Palbinder Shergill. “We need room for different faiths to express themselves.”

“Religion should be a tool to connect with others as opposed to a shield from them,” added Shergill.

“If the government squeezes out conscientious objection, we will lose solidarity in our society,” noted Dr. Mattson.

The major themes discussed in the two-day gathering were Solidarity in Diversity, Reconciliation and Refugees and Immigration.

“The residential school system severed the Indigenous sense of their own spirituality,” said Karen Joseph, Director and CEO of Reconciliation Canada. “Reconciliation becomes a new spiritual covenant that we have with each other.”

“We are at a pivotal point in Canadian society when historical victims have become survivors,” said Bishop Mark MacDonald, National Indigenous Bishop, Anglican Church of Canada. “Reconciliation begins when an oppressed people reclaims their humanity.”

John Ralston Saul, one of Canada’s leading public intellectuals and the award-winning philosopher, novelist and essayist, delivered a keynote address on the Place of Spirituality and Citizenship.

“Canada is a unique land of intentional complexity,” said John Ralston Saul. “It’s time that we embraced our own heritage.”

“We are the oldest continuous democratic federation in the world,” he added. “Complexity, rather than defining ourselves monolithically, allows Canada to survive.”

Dr. Saul began his speech by reflecting on land acknowledgment statements that Canadians have adopted in public gatherings.

“The heart of that other possible relationship is a concept of spirituality which is the concept that human beings are not above the land but that people are in the land.”