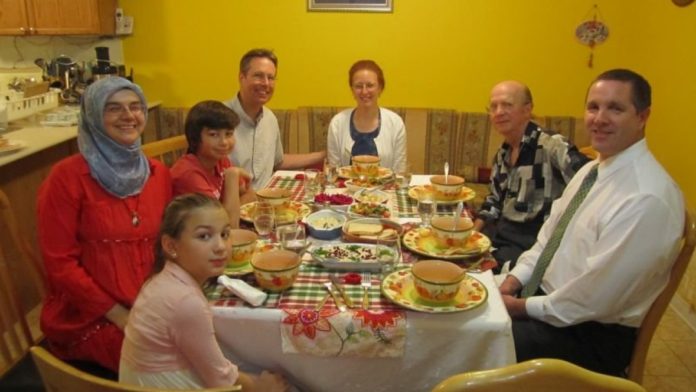 Ramadan is here and Muslims all over the world will be fasting this month. It is the month when life goes topsy-turvy as night becomes day and normal sleep patterns change.  As a Muslim woman who recently moved from one place to another, I have had the fortunate experience of fasting in two different locations that are across the world from one another: the first being Saudi Arabia during my childhood and teenage years, and the second being Canada during my young adulthood.

It is assumed by many Muslims around the world that the holy month of Ramadan in Saudi Arabia is a particularly unique experience because of the Islamic holy city of Mecca residing in the heart of the land.  Indeed, it is a unique experience where the Ramadan ‘flavour is in evidence’ everywhere: on the roads where no one is seen eating or drinking, the shops -deserted during the day and crowded at night -and mosques filled with worshippers. In contrast, Ramadan in Western communities tend to be less evident because non-Muslims drink & eat in public and Ramadan traditions are mostly observed indoors. Although Ramadan in Saudi Arabia is a time where an individual gets to practice in the community as a whole, which is truly a remarkable experience – I found the true spirit of Ramadan to be best manifested in Canada.

As a by product of being catered to the majority of the population, I found Ramadan in Saudi Arabia to be overwhelmingly commercialized and attached to social protocols. In the late afternoon just before sunset, when fasting is taking its toll on the human psyche, the whole kingdom stand almost still in a hush, which sounds like 1:00 AM in normal times. Ramadan in Saudi seemed to be a time of excessive television watching, feasting on lavish midnight meals and going the extra mile in what seems to be Saudis’ favourite indulgence: mall shopping. Traffic right before Iftar becomes somewhat of a nightmare because everyone is rushing home to eat when Athaan begins. The holiest month in the Muslim calendar is becoming increasingly commercialized, and rather deviated from its purpose.

That is not to say that Ramadan in Saudi does not have its special moments; some of my favourite things about being in Saudi Arabia during the period of Ramadan are the following: being surrounded by family who support me with my fasts and do it alongside me and being fortunate enough to be able to visit Ka’aaba during this holy month. These are two things that surely make Ramadan lovely and worthwhile. However, family and friends’ invitations to Iftar and Suhoor typically bombard Ramadan in Saudi. Although it is wonderful feeling to be surrounded by loved ones, sometimes the duty of keeping up with invitations and inviting back becomes taxing.

In Canada, I was completely alone. I had no family to be with during Ramadan and only a number of Muslim friends to practice with me. As a university student, I had a pretty busy schedule that occupied my time before sunset. My Muslim university friends also were busy so there was no opportunity to initiate formal invites except for a few. This might sound unfortunate, but I believe this was a blessing in disguise. I passed the time by cooking a light meal for myself, and had a lot of time to reflect, worship and maintain my academic and extracurricular obligations. I had the advantage of really delving spiritually into my prayers, going to Taraweeh later in the evening, and reciting the Qur’an with my all my heart in it.

Ironically, I was completely unaware of the true nature of fasting before I came to Canada. I learned that fasting is not just the state of remaining hungry and thirsty. Its nature and effect can only be discovered by experience.  Ramadan in Canada encouraged me to focus on the true purpose of the holy month like my ability of self-restraint, which I have learned to apply it to my everyday life to bring about self-improvement. Nevertheless, Ramadan in both places always remains a distinct special experience that I personally can make the best of it by practicing igniting the spirit of Ramadan.

Sister Sabria’s door is always open, much like her heart