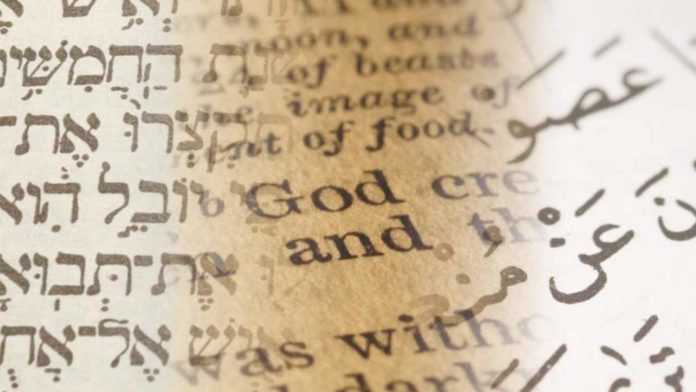 When those who believe in the Torah of Prophet Moses, or the Gospel of Prophet Jesus, or the Qur’an of Prophet Muhammad, fight with each other; we know that some religious leaders are using verses of sacred scripture, either their own, or that of others, to disguise hate-filled political purposes under religious ideals and slogans.

For example, long before Da’esh (“Islamic State”) began murdering tens of thousands of innocent men, women and children in order to ‘establish God’s right order in the world’, Pope Gregory VII got the massacre ball rolling. Upon assuming the papacy in 1073, Pope Gregory issued official proclamations urging Christian princes to recover lands occupied by Muslims in Spain, over which he claimed papal sovereignty on the basis of previous rule and right. These decrees were really the beginning of the Christian Crusades against Islam.

Gregory’s ideas about Christian war, which were extended to fighting against domestic enemies of the papacy and the Church (like Emperor Henry IV), were also supported by his successors in the papacy. Gregory VII’s idea that popes were responsible for establishing the right order in the world, which could only be obtained through righteous Christian violence directed by the papacy, formed the political basis for all later Christian Crusades.

It also further stimulated an all-out missionary battle against Judaism and Islam that had already begun in Spain, that led Muslims like Ibn Hazm to respond in kind. Religious truth became a zero sum game: anything positive said about another religion was seen as a weakening of your own side. The goal was not to modestly try to harmonize various religious perspectives of the one and only God; but to self-righteously exaggerate religious differences, well beyond any reasonable understanding of the two sides.

If one believes that there is only one God who is revealed by many different inspired Prophets, then we should be able to learn more about God’s will by gaining insights into our own unique revelation, from other revelations of that one God. Since all monotheistic scriptures come from the one and only God, we should view other scriptures as potentially enriching our understanding and appreciation of our own scripture. But in the Middle Ages, almost all readers thought of revelation as a zero sum sport like tennis; rather than a multiple-win, co-operative sport like mountain climbing.

In a zero sum game, any value or true spiritual insight I grant to another scripture somehow diminishes my own. This was the result of the influence of Greek philosophy’s emphasis on the logic of the excluded middle. Something is either true or it is false. There is no other option. If two propositions contradicted one another, one or both of them must be false. This would mean that if my religion is true, yours must be false. In modern terms, light could not be both a particle and a wave. Yet we now know that light is indeed both a particle and a wave at the same time, with the difference being due to the observer’s perspective.

This medieval ‘zero sum game perspective’ did not improve much in modern times. In the last two centuries, university academics have written many studies of comparative religion, which they claim are objective and not distorted by their religious beliefs. Unfortunately, academics who treat other religions academically usually do not believe that other scriptures are actually Divinely inspired. Indeed, many academics do not even believe that their own sacred scriptures are Divinely inspired. They use the same kinds of explanation to understand a revealed religion that they would use to explain secular history and literature.

As a rabbi who believes that Muhammad was a Prophet of God who confirmed the Torah of Prophet Moses; I follow a different model. God is the source of all Divine inspiration.

My perspective is that prophets and Holy Scriptures cannot in reality oppose one another because they all come from the same and only source. Prophets are all brothers; it is as if they have the same “father” (God) and different “mothers” (motherlands. mother tongues, nations, cultures and historical eras). All of these factors produce different rituals and legal systems, but their theology can differ only in small and unessential details. Religions differ because the circumstances of each nation receiving them differ. Where sacred Scriptures differ they do not nullify each other; they only cast additional light on each other.

Take for example, the prophet and priest Ezra. Was he a prophet and priest like Ezekiel, or a “son of God” like Jesus? A Jewish convert to Islam Al-Samawʾal ibn Yaḥyā al-Maghribī (d. 1175) accused Ezra of interpolating stories such as Genesis 19:30-38 into the Bible in order to sully David’s origins and to prevent the rule of the Davidic dynasty during the second Temple. A century earlier Ibn Hazm, an Andalusian Muslim scholar, explicitly accused Ezra of being a liar and a heretic who falsified and added interpolations into the Biblical text.

Ezra was a good target to attack because he is specifically mentioned in the Qur’an as ‘Uzair:

“The Jews call ‘Uzair a son of Allah, and the Christians call the Messiah a son of Allah. That is a saying from their mouth; (thus) they only imitate what the unbelievers of old used to say (pagans who believed their many gods had many divine or semi-divine children). Allah’s curse be on them: how they are deluded away from the Truth! (Qur’an 9:30)

Now there are several different places in the Qur’an where the Christians claim that Jesus is the “son of God” is refuted and denied. For example, “Jesus son of Mary, did you ever say to people, ‘Worship me and my mother as gods beside Allah?’ and he will answer, ‘How could I say what I had no right to say?’” [Qur’an, 5:116] And “The Messiah, Jesus son of Mary, was no more than a Messenger of Allah…do not say “Trinity.” Stop saying that.” [Qur’an, 4:171]

And general statements like: “Those who say, ‘Allah has begotten a son’ have no knowledge about it, nor did their forefathers; this is a monstrous word that comes from their mouths. They utter nothing but a lie.” [Qur’an, 18:4,5] (Also see Qur’an 5:72-75, and 19:30. ) Indeed, the verse that follows 9:30 (above) specifically applies to those who believe in Jesus: “They take their priests (Ahbar) and their monks to be their Lords in derogation of Allah, and (take as their Lord) the Messiah, the son of Mary; yet they were commanded to worship but One God: there is no god but He. Praise and glory to Him: (Far is He) from having the partners they associate (with Him). (Qur’an, 9:31)

So how shall we understand the Qur’an statement: “The Jews call ‘Uzair a son of Allah”?

But most Christians to this day, proudly proclaim that they do indeed worship Jesus, as “the Son of God.” Jews however, have always vehemently denied that they worship any partner or other deity except the one and only God. So how can we understand the difference between the two seemingly parallel statements in ayah 9:30?

There is a Hadith attributed to Sunan Al-Tirmidhi that says the Jews worship their Rabbis. One of the Companions then said that this is not true. Muhammad then said that Jews accept what their Rabbis say over the written word of God; so in this way they worship them. This Hadith provides an important clue. Christians actually do venerate and openly pray to both Jesus and his mother Mary; but according to Islamic tafsir cited above, only a very few individual Jews worshiped Jesus, perhaps some Christian Arabs in Yemen who had later converted to Judaism but still continued to elevate Jesus to semi divine status.

Most Jews only figuratively venerate their rabbis as semi divine due to giving their rabbis the power to reinterpret Torah; as Muhammad says because, “They accept what their Rabbi’s say over the word of God, so in this way they worship them.” This Hadith is correct. Orthodox Jews do believe in both a written Torah and an oral (unwritten) Torah, which has been handed down for over 3,200 years, ever since Sinai. They often observe Judaism according to the rabbinic interpretation of this oral Torah.

For example, a Hadith relates that among the Jews, when a woman menstruated, they did not dine with her, nor did they live with them in their houses (share the same bed); so the Companions of the Apostle asked God’s Messenger, and God revealed this verse to him: “They ask you about menstruation; say it is a discomfort, so keep away from woman during menstruation.” (Qur’an, 2: 222) The Messenger of God said: Do everything except intercourse. The (Orthodox) Jews heard of that and said: “This man does not want to leave anything we do without opposing us in it.” (Sahih Muslim: Book 003, Number 0592)

Both Islam and Judaism have laws about ritual pollution deriving from a woman’s monthly period. Orthodox Judaism had greatly expanded the prohibitions against having sex during a woman’s period. Prophet Muhammad opposes this expansion and limits the prohibition for Muslims. Reform Rabbis today are much closer to Islamic practice than they are to Orthodox Jewish practice in this matter. On the other hand, although Orthodox Jews to this day do require married women to cover their hair, they never required women to cover their faces with a veil.

Thus, different circumstances produce different rituals and legal systems, but basic theology can differ only in small and unessential details. As the sage of Konya, Jalal al-Din al-Rumi, says, “Ritual prayer might differ in every religion, but belief never changes.” (Fihi Mafih, 49)

So we should emphasize our common beliefs and respect our particular differences because, “To each among you, We have prescribed a law and a clear way. If Allah willed, He would have made you one nation, but (He didn’t in order to) test you in what He has given you; so strive (compete) as in a race to do good deeds. You all will return to Allah; then He will inform you about that in which you used to differ.” (Qur’an, 5:48)