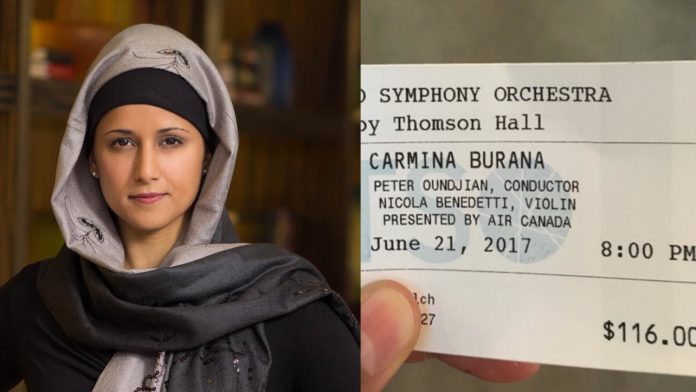 He chopped her in the neck and called her a “child” and a “bitch.”

A University of Toronto professor was at Toronto Symphony Orchestra at Roy Thomson Hall Wednesday evening when she said an older white man chopped her in the neck and called her a “bitch” after she took a photograph.

Aisha Ahmad, a Muslim-Canadian professor who teaches international security at the U of T, told VICE she was at the symphony with a friend after being gifted tickets to Carmina Burana from a fellow professor. Having been to the symphony many times, she knew that flash photography is not permitted so she took a non-flash photograph before the performance began, as she had in the past.

At that point, “the man behind me chopped me on the neck and said ‘put that away'” Ahmad said. “I was stunned. I turned around and said, ‘You can’t hit me, that’s assault. If you hit me again, I will charge you.'”

Ahmad, who said she was the only non-white person in her section, told VICE others seated nearby turned around to find out what the commotion was about. Then they took the man’s side.

“They began to pile on and chime in and say ‘Stop it already, enough’ and ‘What’s wrong with you?,'” Ahmad said. “In that moment I realized the entire section had decided I didn’t belong there.”

Francine Labelle, a spokeswoman for the Toronto Symphony Orchestra, told VICE it has “zero tolerance for violent, disrespectful behaviour” and that the man has been banned from future TSO events. She also said the TSO reported the incident to police.

But Ahmad said she’s dumbfounded at the way things were handled that night.

After the initial attack, Ahmad left her seat to speak with security and later two managers with Roy Thomson Hall. She explained what happened and that she was a U of T professor, and asked to talk to a supervisor about the incident. Ahmad was told “nothing could be done” until intermission and that she was welcome to wait in the hallway in the meantime—about an hour.

At intermission, Ahmad said the doors opened and the man who had hit her beelined towards her.

“He said ‘you’re the woman who accosted me'” she said, and she responded that he had hit her. Then she took out her phone in order to take a photo or video in case things escalated. That’s when Ahmad said the man lunged at her.

“I’m quick on my feet, I managed to escape via the side,” said Ahmad, who is a boxer. “He clearly became very aggressive and very agitated.”

Despite the fact that he lunged at her in front of a crowd of people, Ahmad said the venue managers insisted they had to hear “his side of the story” before taking any action.

After they confirmed with witnesses that he had hit her and cussed at her, she said they asked her if an apology would be sufficient.

“I then said ‘Do you think it is sufficient for your patrons to be able to hit other patrons and that it can be resolved via an apology?” She said the managers told her she was within her rights to press charges.

Ahmad did call the police, which is when the venue managers escorted her attacker out of the building. But ultimately, she changed her mind, deciding she didn’t want to waste police resources that could be better spent on other issues.

She said Roy Thomson Hall managers asked her if she wanted to return to the show, which “seemed completely divorced from how a person might feel in that moment.” She decided to go home and was told they’d provide her free tickets to another show.

“By that point I had already tweeted everything… and so I think they had started to come to the realization that maybe this would not go well if they didn’t do something,” she told VICE, noting she’s been thinking about how her students or people who don’t have her influence would have been treated.

Ahmad said she was acutely aware that in that situation, as a woman of colour, she had to behave “perfectly”—speak with a calm tone; maintain her cool; document everything; and get herself to safety.

Fighting back—despite having years in self defence training—would be out of the question, she said.

“There is a very high likelihood the result of such defensive action to protect your own body will be that you will be beaten within an inch of your life and then jailed,” she said.

Ahmad told VICE it’s “insane” to her that she would be expected to go back inside and sit next to someone who had attacked her and that managers wanted to hear out her attacker even after he lunged at her publicly.

“I cannot imagine such deference would have been given to someone from a less privileged background.”

She said cultural institutions like the orchestra are very white, and as such don’t reflect Toronto’s diversity—something she feels they need to make an effort to change.

Labelle of Toronto Symphony Orchestra said everyone is welcome at the orchestra’s events and “should feel safe.”

“Like the rest of society, we want to be inclusive of all groups and ensure that everyone has a place in our audience.”