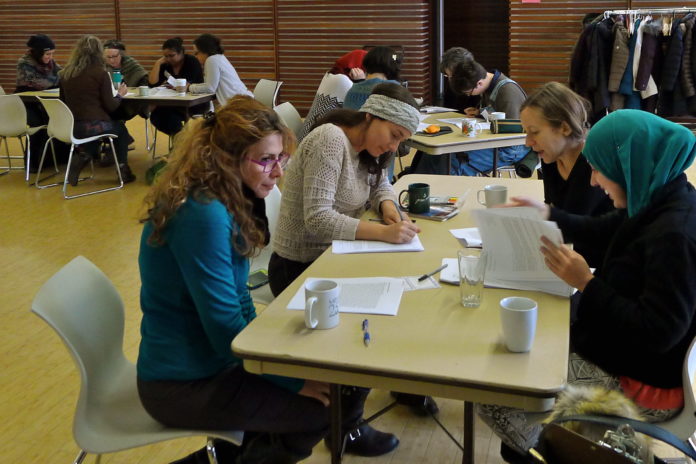 ike many, I feel horrified and overwhelmed by the brutal attack at the Centre Culturel Islamique de Quebec in my home province. I am dismayed and worried about the future – in Canada, in the United States, where I also have citizenship – not to mention family – and around the world, where strident governments are fuelling the polarization of people along personal, political and religious lines.

On Jan. 27,  the morning after the shootings, Rabbi Miriam Margles of the Danforth Jewish Circle in Toronto shared these poignant sentiments: “The wisdom and moral imperatives of my Jewish tradition emphasize the sanctity of human life, reminding us that the taking of one life is akin to destroying an entire world. This kind of violence seeks to instil fear in us all and to break apart the essential relationships that connect the diverse people of this country.”

Rabbi Margles asserted the necessity of “standing arm in arm with people of all faiths and all Canadians of good will.” The rabbi’s words are a reminder of our most fundamental responsibilities to people of all backgrounds, guided by Jewish values that affirm our shared humanity.

Just hours before the murder of six Muslim men during their prayer services, I was gathered with a group of Muslim and Jewish women in an artist’s studio in Toronto. Together we are developing an art project that considers our place as women within our faith traditions. As the project’s curator, I teamed up with academic and longtime inter-faith advocate Shari Golberg, founder of Shema & Iqra’: The Jewish-Muslim Text Project, which brings together Muslims and Jews using religious texts as a springboard for dialogue.

Shari and I invited Jewish and Muslim women artists to make work together, guided by noted artist and community arts facilitator Rochelle Rubinstein. Our process began last month when we joined to study biblical and qur’anic texts facilitated by Shari and Nevin Reda, assistant professor of Muslim Studies at University of Toronto.

I am deeply moved and encouraged by the sincerity, openness and honesty in this intergenerational assemblage of women, even in the face of our differences. There is a brightness in the room when we gather, the radiating presence of good will and genuine curiosity. We are sisters, mothers, daughters, friends. We are women whose relationships to our traditions prompt us to dig deeper, to question, to imagine.

Our project is called Blood, Milk and Tears. We look at women’s bodies and positions in relation to religious statutes and practices. There have been many points of commonality discovered among the women as they generously share their experiences, from the struggle for equal access to ritual spaces to personal struggles with fertility, breastfeeding, menstruation, loss and mourning.

When we took up these essential themes as guideposts for our process, little did we know that we would be thrust into a period of national mourning. Given the devastating violation of sacred space and senseless loss of life in Quebec, never has our project felt more vital. Never has it been more significant to come together to learn about each other’s cultures, to be vulnerable and generative, representing our experiences as women and representing our communities.

We are no more than 30 women among a vast sea of humanity. Nevertheless, ours is a story of optimism and unity amid tragedy that threatens our Canadian multicultural ideals. It is natural to be pulled towards despair, but signs of hope surround us, from the private sponsor groups working with JIAS to reunite over 100 Syrians with family members already in Canada to Jews joining in support of Muslims at their prayer services on the Friday after the Quebec attacks.

I’m under no illusion that all Canadian Jews share the impulse to rally behind Muslims in this moment, to speak out against Islamophobia or to better understand Muslim cultures. But I will not allow simplistic, fear-laden, divisive voices to derail me from an elemental Jewish duty: to love your neighbour as yourself, especially not since I have experienced that exchange of love first hand.

Evelyn Tauben is the curator of FENTSTER. Starting Feb. 24, Blood, Milk & Tears will be on view at FENTSTER at Makom, on 402 College Street. A public opening event will be held on March 8. The exhibition is presented by FENTSTER: A Window Onto Jewish Life Through Art and Shema & Iqra’: The Jewish-Muslim Text Project as part of the Myseum Intersections Festival together with Noor Cultural Centre, University of Toronto Multi-Faith Centre, Makom: Creative Downtown Judaism  and Emmanuel College of Victoria University in the University of Toronto.

Who Speaks for Islam?