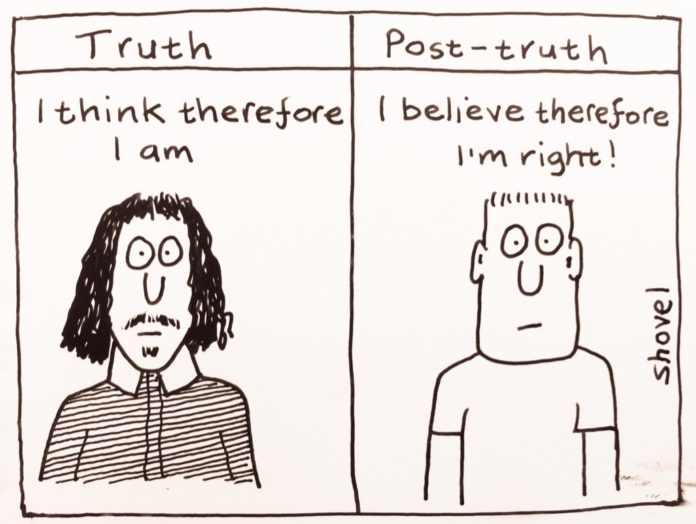 The moral compass of our world is being undermined by an emerging post-truth and fake news culture.

Post-truth has been chosen by Oxford Dictionaries as the word of the year because, according to Oxford dictionaries, it best reflects the world’s “ethos, moods, or preoccupations” in 2016.
Post-truth describes belonging to a time in which truth has become irrelevant and in which objective facts are less influential than appeals to emotion. Meanwhile, Facebook and Google are facing criticism for their role in allowing fake news stories to spread over the internet.
Defining traits of this post-truth / fake news culture is that it relies on statements/ assertions that “feel true” but have no basis in fact.
People who peddle post-truths / fake news willfully lie and continue to repeat their lies (‘talking points’), even if these are found to be untrue. This post-truth / fake news trend is posing a serious threat to the moral fiber of our society.
Truthfulness (Sidq) is a virtue that defines civil societies – societies in which citizens have a high degree of integrity – upholding ‘true thought, true words and true actions’ Allah, in the Qu’ran, describes the truthful ones (as-Sadiqoon) as those who have unwavering faith in God and who work wholeheartedly with integrity and sincerity in God’s way.
The Prophet Muhammad’s description of truthfulness (sidq) is speaking about habituating truth in one’s life to become a ‘Sadiq’:
“Truth leads to piety and piety leads to paradise. A person persists in speaking the truth till he is enrolled with Allah as a truthful person.”
Truth-thinking – Truth-telling – and truth-living – leads to piety.
DEALING WITH THE FAKE NEWS / POST-TRUTH CULTURE

1. Be with the truthful ones

It is said: “The sign of the liar is that he makes plenty of promises, when there is no one around to take him up on them.”
It has now become very important for all of us to engage in critical thinking when news/information comes to us.
“O you who believe! If a rebellious evil person comes to you with a news, verify it, lest you harm people in ignorance, and afterwards you become regretful to what you have done.” [Qur’an, 49:5].

3 – Hold to truthfulness in all circumstances

Julie Barlett: Be a Muslim foster parent in KW