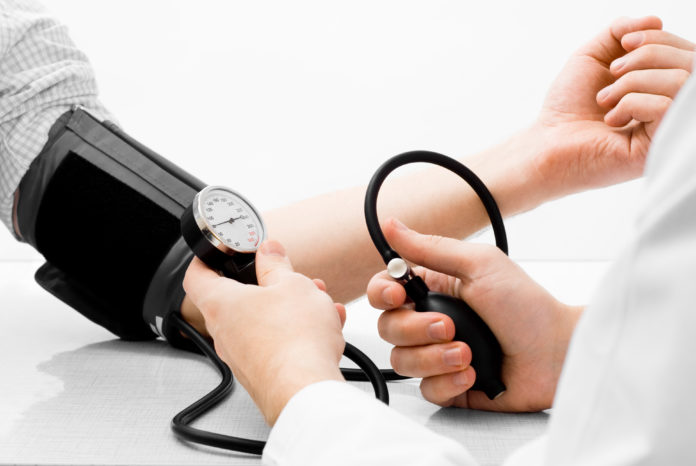 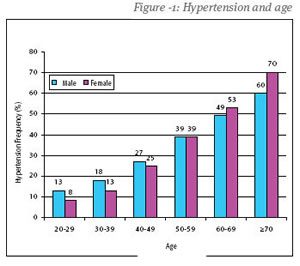 The world hypertension statistics
Almost a quarter (26 percent) of the world’s adult population suffers from high blood pressure. It is estimated that this number will reach 29 percent by the year 2025. These average statistics based on the adult population of the world includes people of various age groups and from different countries. The risk of hypertension increases with age. While the figure for 20–29 year old males is 13 percent, it increases to 40 percent between the ages of 50–59, and reaches over 60 percent after the age of seventy. Although there are slight variations in women, many of the figures are almost the same (Figure 1).

These figures are quite striking; one out of every two people over the age of sixty suffers from high blood pressure. As for those in their seventies, the figures have already reached almost 70 percent and are expected to increase even further as this group ages. Many diseases in the adult population remain at 1–2 percent; therefore, these figures convey just how common and serious hypertension really is. 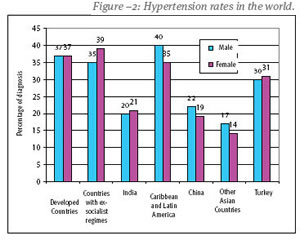 The hypertension rates in China and India are well below the world averages, with males at 17 percent and females at just 14 percent (Figure 2). In some societies, for example in the Amazon’s catchment areas, the Yanomami Red-Indians, and tribes in the highlands of Papua New Guinea, few cases of hypertension can be found, and blood pressure among these groups does not tend to increase with age.

The reasons for the increase in hypertension
There is a genetic disposition to develop hypertension. The recent studies reveal that high calorie foods, a high level of salt intake, the lack of physical activity, and alcohol intake all play a significant role in the increase of hypertension. By examining these reasons alone, we clearly see how important the prohibition of alcohol is and the Prophet’s words of wisdom advising us to eat less bear on our lives and prosperity in both this world and the hereafter.

Excess of body fat (obesity)
Another recent health phenomenon is the huge increase in people suffering from obesity, mainly due to excessive eating and the lack of exercise. Studies related to disease outbreaks (epidemiological studies) show that obesity is clearly associated with hypertension. These studies also reveal a significant increase in people suffering from both obesity and hypertension. According to these studies, 78 percent of the male and 65 percent of the female cases of hypertension are connected to obesity. Similar studies carried out in various countries confirm that a large number of people with high blood pressure were overweight and that losing weight substantially reduced their blood pressure levels. In fact, the blood pressure in some was reduced by losing weight alone, without the need of any medication.

Many studies also evaluated the connection between obesity and hypertension by measuring the level of the leptin, the hormone that controls the appetite, in the body. High levels of leptin induce stimulation in the sympathetic nervous system and shrink the veins (causing an increase in blood pressure). Another reason for the increase in the activity of the sympathetic nervous system of overweight people is the rise in insulin levels, which in most people can be controlled by diet. Finally, the kidneys of overweight people retain greater levels of salt and water, which causes an increase in blood pressure. These conditions, which on many occasions can prove to be very serious, are in fact contrary to the intended physical state of human creation, as the Prophet Muhammad, peace be upon him, declared in these words of warning: “What I fear most for my followers is a large stomach, excessive sleep, idleness, and the lack of certainty (in faith).”

Excessive salt and alcohol
Evidence from both experiments on animals and clinical studies proves that the excessive intake of salt increases blood pressure. In animal experiments, a high intake of salt in the diet of rats showed a rise in blood pressure, which resulted in strokes. In another experiment, more than 0.50 ounces of salt was added to the diet of several chimpanzees for a period of twenty months. The studies showed an increase of 33 mmHg in the systolic blood pressure and 10 mmHg in the diastolic blood pressure, and when the salt was removed from the diet, the chimpanzees’ blood pressure returned to normal levels. Indeed, salt is an important nutrient for the human body. Sodium, potassium, and calcium salts are essential for all nerve cell activity, for muscle movement, and for the osmotic balance of body fluids. Medical science of today stresses the importance of natural foods, and bread, an important part of our diet, meets the body’s daily requirement of sodium. Thus adding salt to our food and exhausting the kidneys is not necessary.

Various clinical studies on humans have shown that excessive salt in the diet increases blood pressure levels. Salt has been used in the human diet for the past 8000 years, since the beginning of agriculture and animal farming. A human’s normal requirement of sodium is 8–10 mmol/per day. However, in economically developed countries, the daily sodium intake of most people has risen to 140–150 mmol per day (8–9 grams), almost 14–15 times more than the normal physiological requirement. In a study carried out on the subject, 10,000 blood pressure sufferers in 32 countries were closely monitored, and the results showed that as the salt intake was reduced, blood pressure levels dropped. In another study, 24 hour urine samples were analyzed, and here too, a low sodium diet showed a decline in blood pressure.

As a result, the number of high blood pressure cases in the world has exceeded that of contagious diseases, and this is closely connected to our eating and drinking habits. If humans continue to excessively eat and drink as they are at the present, most people will be suffering from high blood pressure in the very near future.