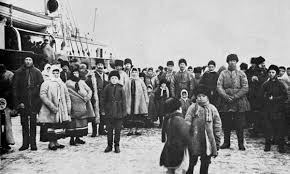 On July 1st, 1867 Canada became a fully self-governing entity within the British Empire. This gave Canada the power to govern itself and to impose laws without having to consult the British. Since then, Canada has become a very diverse and multicultural country. Immigration in Canada has become so important that it is shaping the way our country is developing. Between the 1600s-1800s French and British settlers came across the Atlantic in hopes of discovering a new land. When faced with discrimination upon arrival the perseverance, determination and lack of fear is what drove our country towards multiculturalism.

In the 1970s, Pierre Elliott Trudeau’s multiculturalism policy is what brought millions of immigrants to Canada and gave them the right to preserve and develop their own cultures within Canadian society. Today, Canada has become a home for people escaping horror, fear and war over seas. Canada welcomes over 300, 000 immigrants per year, many coming from the Middle East (Watch Canada.org). Canada has become a very special country since it was first established. The several different ethnic communities present within this country allows for people express themselves naturally without judgement. Immigration in Canada is what has drove this country toward a high degree of ethnicity and has shaped it into the thriving and successful country it is today.

Canada’s ethnic diversity started in the late 1600s when French and British settlers travelled across the Atlantic and discovered Canada’s land. French explorers landed in modern day Quebec to find farming areas, rivers and rich soils. Expert explorer Samuel de Champlain was able to establish cities within Quebec for French Immigrants. These cities are Quebec City, Trois-Riveres and Montreal. Upon arrival the French immigrants were not accepted into this land. Discrimination from indigenous Canadians developed a stereotype among the French. Early years as a Canadian living in New France were difficult as the majority of the population disliked you and finding ways to get employed were limited. English explorers landed in Canada around the same time as the French. Settling in different areas such as Boston, New York and Hudson’s Bay, the English were able to establish a working trading system within Canada. The fur trade evidently was Canada’s first economy. To this day the Hudson’s Bay Company is Canada’s oldest company. Both the English and the French had major impacts on Canada’s early stages as a country. Colonization in Quebec led to increasing immigration from France and the economy establish by the British led to an efficient trading system between indigenous Canadians and settlers.

The 1970s impact on immigrants migrating to Canada is the most impactful reason as to why Canada is so diverse. The Prime Minister at the time. Pierre Elliott Trudeau, passed a multiculturalism policy mandating to preserve the cultural freedom of all individuals. At the time commissioners were promoted to think what these small minority groups had to offer Canada and the success they brought forth. These minority groups were able to receive more recognition and support in preserving their heritage. The 1970s saw a dramatic increase in immigrants calling Canada home. The Liberal government was able to review the immigration policy and promote Canada’s economic and social goals. The policy also fulfilled Canada’s duty in international relations to refuges. The Immigration, multiculturalism and refugee policies in which Canada developed all work together. In the 1970-1980s 25% of Canada’s new comers came in the form of refugees fleeing south Asia. From here on, Canada made a name for itself calling it home to those fleeing violent and unsafe conditions. Having people of different ethnic groups not only made Canada more diverse, it influenced the size of the labour market. More immigrants were bringing foreign skills into Canadian workforce which broadened our spectrum. The 1970s liberal government were able to review and mandate legislature which paved the route in which Canadian immigration would follow. Immigration aided several struggling aspects of the Canadian economy at the time and it strengthened our country.

Modern day immigration has grown immensely since the 1970s. By the end of the 90s decade Canada’s population rose to 29 million. In twenty years approximately ten million people moved into Canada and applied for permanent residency. In the past five year’s immigration from a particular group of people rose due to violence and terror in their homeland. The Syrian refugee crisis was experienced globally as millions of innocent children, women and men had to flee due to the rise of the Islamic State. Canada accepted more than 200,000 refuges into our country and aided with their financial and social issues. Canada became a haven for refuges after this point as many immigrants travel here in hopes of finding peace. Canada as a country developed into a place that many people see a welcoming, safe and accepting environment. In a tweet composed by Prime Minister Justin Trudeau following America’s Muslim ban he says “To those fleeing persecution, terror & war, Canadians will welcome you, regardless of your faith. Diversity is our strength (@JustinTrudeau).”

Immigration in Canada is one of our driving factors as a country and provides to our country’s daily success. It has shaped our country into our strong ethnic community that it is. Exploration by the British and French in the late 1700s and early 1800s established vital colonization within Canada and set up an initial economy. The revised multiculturalism and immigration policies that were set out under the Pierre Elliott Trudeau administration brought fourth immigrants from around the world. The policies showed that the skills and trades that these immigrants brought with them would thrive Canada’s working industry. Modern day immigration in Canada has benefited us in several industries and has protected hundreds of thousands of people from war and terror. Immigration in Canada despite the time period, has influenced our country greatly. As Canadians, immigration is the heart and soul of what we believe in.