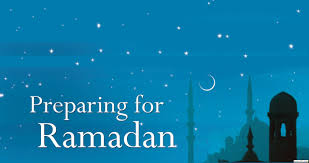 Ramadan is the 9th month of the Islamic lunar calendar. It is a special month of the year for over one billion Muslims throughout the world. During this month healthy adult Muslims fast, from the break of dawn until sunset. Fasting requires abstinence from eating, drinking, and intercourse during the daylight hours; that is, about an hour and a half before sunrise until sunset. An early breakfast is recommended in the prophetic tradition, taken before dawn. At the end of the day the fast is broken with a meal called the iftar. It is the prophetic tradition to break the fast with a date, olive or some water.

Ramadan is a time of intensive worship and devotion to God, of reading the Qur’an and reflecting on its teachings, of comprehensive thanksgiving, giving to charity, practicing self-control and kindness, of training oneself to be a better person spiritually and improving relationships with others.

Is Fasting difficult?
To non-Muslims fasting in Ramadan may appear to be a time of hardship and deprivation, but that is not the experience of Muslims. There are at least five ameliorating factors that make fasting much easier than it appears. These are (1) the magic of intention, (2) the community spirit, (3) the ability of the human body to adapt, (4) social/cultural cooperation, and (5) divine help. The initial intention significantly reduces the perceived difficulty. Once one commits to fasting, it becomes much more doable and feasible. Moreover,knowing and seeing that fellow believers are fasting with you and sharing the early breakfast or the dinner with them strengthens the community spirit. Thirdly, the human body is amazingly adaptable. Within the first few days of fasting the body adapts to the new schedule and one does not feel hunger as one normally would. In regards to social and cultural cooperation, in communities where Muslims are a majority or a significant minority, there is assistance or cooperation offered to the fasters, such as flexible holidays and working hours. Finally, for any worshipper, there is divine help which eases the task once the worshipper has committed to doing it.

Over 500 million Muslims, from age 9 to 90 fast every year. Fasting does not prevent them from conducting their mundane work or business as usual. As a pillar of the religious life in Islam, fasting is probably the most practiced form of worship. Muslims think of Ramadan as a kind of tune-up for their spiritual lives.
Fasting establishes a continuity of practice with religions such as Judaism and Christianity, in which fasting is recognized as an important element of devotion to God. The very verse in the Qur’an that commands Muslims to fast reminds them of this connection: “O you who believe! Fasting is prescribed on you just as it was prescribed on the people before you.”

The four dimensions of Ramadan

The first is the obvious behavioral dimension. Fasting in Ramadan is a means of learning self-control. Due to a lack of preoccupation with the satisfaction of bodily appetites during the daylight hours when fasting, the spirit gains a measure of ascendancy. The soul is freed of the chains placed by carnal desires. Fasting provides a break in the cycle of rigid habits or overindulgence.

2- The Religious Dimension
During fasting, not only the stomach, but also the tongue, eyes, ears, other limbs, and the heart and mind are equally obligated to be restrained. Just as we control our physical appetites, we also must control our negative emotions, thoughts, feelings and impious actions. The Messenger of Islam, Muhammad, said that if a person does not control their senses and behavior, then God does not require that person to refrain from eating. He added that if someone verbally abuses you, acts ignorantly towards you, or even hurts you, you should respond by only saying, “I am fasting; I am indeed fasting.”

As far as the social dimension is concerned, fasting is a way of experiencing hunger and developing sympathy for the less fortunate and thus learning thankfulness and appreciation for all of God’s bounties. Fasting increases people’s sympathy and compassion for those who have been deprived of their daily means of survival. Although everybody knows, in an abstract sense, that there are people who suffer from hunger and poverty around the world, this knowledge may not be great enough to have an impact on our daily behavior. During the fast of Ramadan, this knowledge is internalized, as we have a glimpse into their experience of hunger. This deeper, internalized knowledge helps us minimize wastefulness and to sincerely do our best to help those in need.

Ramadan is also a time of generosity. People are more generous, more cordial, and more ready than at other times of the year to do good and charitable work. Muslims often invite one another, friends and guests, Muslims and non-Muslims, in particular neighbors, regardless of creed, to share the evening meal and exchange gifts and best wishes.

4- The spiritual dimension
In the spiritual dimension, fasting during Ramadan is an act of obedience. It leads to sincere thankfulness, which is the heart of worship. It also empowers our spiritual side over our physical tendencies. If we imagine our body as a vessel, such as a ship, our mind, heart and carnal desires are like hands that are trying to control this vessel. Fasting weakens the effect of the carnal self and strengthens the effects of the mind and the heart on the control of the body.
The experience of hunger in fasting breaks the illusory lordship of the carnal self, or ego, and, reminding the carnal self of its innate helplessness, convinces it that it is only a servant.

Yuksel A. Aslandogan is the Vice President of Institute of Interfaith Dialog, Houston, Texas.